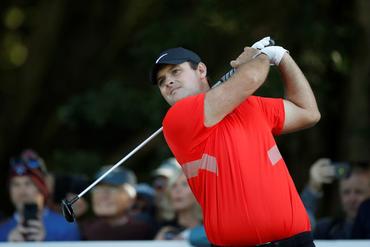 MELBOURNE (Reuters) – Patrick Reed’s dismal Presidents Cup continued on Saturday as he and Webb Simpson slumped to a third successive defeat at Royal Melbourne, the U.S. pair going down 5&3 to the Internationals’ Hideki Matsuyama and CT Pan in the morning fourballs.

Little has gone right for the man nicknamed ‘Captain America’, who has been heckled by spectators throughout the event following his controversial waste bunker penalty in the Bahamas last week.

Reed and Simpson lost to Japan’s Matsuyama and Taiwanese debutant Pan in the Thursday fourballs before being beaten by Marc Leishman and Mexico’s Abraham Ancer in the foursomes the following day.

U.S. captain Tiger Woods gave Reed and Simpson a third chance to get it right on day three but they were well beaten by East Asian aces Matsuyama and Pan, who attacked the greens and built a three-hole lead by the eighth.

While Pan was holing virtually every putt, Reed watched his putts slide harmlessly by and could not manage a single birdie in the curtailed round.

The fiery Texan had played up to his role as pantomime villain on Friday, making a shoveling gesture with his putter after a birdie in a defiant response to jeering spectators.

But there was no histrionics on Saturday from the stocky 29-year-old as the Internationals finished the job at the 15th.

Reed, one of his team’s four captain’s picks, has now failed to score a point in five successive matches when partnered up at team events, having been beaten twice with Woods at last year’s Ryder Cup in France.