Canadian village razed by wildfire wrestles with climate-proofing its future 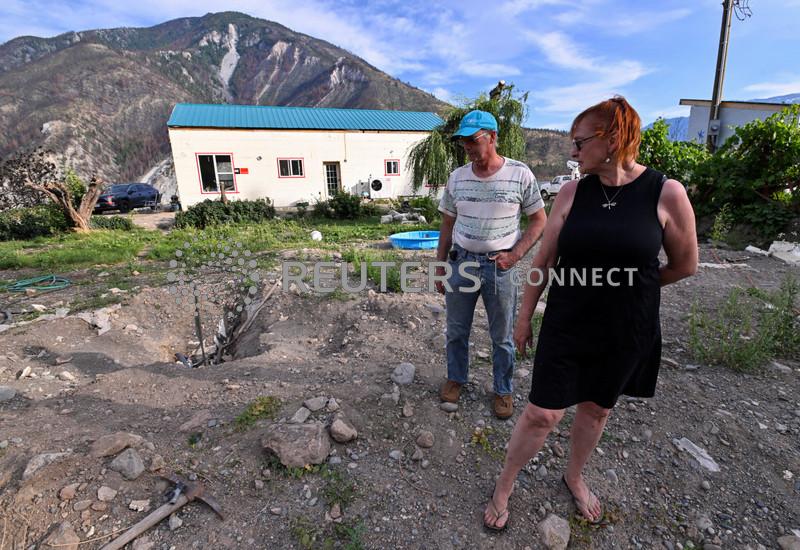 Tricia Thorpe and her husband Don Glasgow stand in the footprint of their former home, a year after a wildfire entirely destroyed the western Canadian village of Lytton, British Columbia, Canada, July 24, 2022. REUTERS/Jennifer Gauthier

REVELSTOKE, British Columbia (Reuters) – A year after a wildfire destroyed the western Canadian village of Lytton, residents, municipal leaders, and the British Columbia government are grappling with the slow and costly reality of future-proofing a community against climate change.

The remote village sits at the confluence of the Fraser and Thompson rivers in the high, dry mountains of interior B.C., making it a bullseye for fires and landslides. In June 2021, 90% of Lytton’s structures burned down, a day after the village recorded Canada’s hottest-ever temperature.

But long-term disaster mitigation plans and net-zero ambitions are running up against the realities of human impatience and reimbursement limits from insurers. Burned-out residents, many still living in temporary accommodation, want to rebuild homes and get on with their lives.

“There’s a distinct difference between what would be ideal and what’s realistic,” said Tricia Thorpe, 61, who lost her home in the fire.

“I don’t think anybody has a problem with building fire-smart, but they’re trying to build a model village. They’re talking about solar (panel) sidewalks.”

As climate change intensifies the risk of destructive weather is rising, spurring focus on how communities are built.

Insured damage for severe weather events across Canada hit C$2.1 billion ($1.63 billion) last year, according to the Insurance Bureau of Canada (IBC), including C$102 million for the Lytton fire. Since 1983, Canadian insurers have averaged about C$934 million a year in severe weather-related losses.

The wrangling over how to restore Lytton highlights the messy reality of climate adaptation, and what costs and delays people are willing to endure to cut carbon emissions and mitigate fire risk.

In the 300-person village, some lofty ambitions have already been shelved in favor of rebuilding faster.

Lytton council wanted to adopt building bylaws that require net-zero emissions homes, but scaled that back to lower energy-efficiency standards after residents pushed back.

The village also considered burying all its power lines to reduce fire risk, a three-year process, but is now installing temporary overhead lines instead to get the job done in nine months.

“At times, I get frustrated with the lack of knowledge and the fact that residents think we’re trying to make it impossible for them to rebuild,” Lytton Mayor Jan Polderman said.

“We could become a first-generation model for net-zero.”

In the 13 months since the fire, little progress has been made on restoration, with only a quarter of properties cleared of ash and debris.

The local council is still finalizing fire-safety building bylaws they say will be the most comprehensive ever developed in Canada and make Lytton the best-protected community in the country.

The new bylaws, based on expertise from Canada’s National Research Council on developing communities in wildfire-prone regions, cover everything from building materials, to landscaping and maintenance, to what can be stored on properties.

Finalising the bylaws and community consultation has taken months.

“I’m sure if we’d just said ‘Let’s get people back in their homes ASAP’ it would have been faster, but then we might be in the same situation in a few years time,” said Kelsey Winter, chair of the B.C. FireSmart Committee, a provincial organization leading community engagement in Lytton.

“It’s taking longer than many people wanted but Lytton is breaking new ground.”

Other complications have dogged the recovery. Record-breaking floods in November washed out local highways, which were also intermittently closed over the winter for avalanche control.

In addition, the village sits within the Nlaka’pamux First Nation territory and residents require archaeological surveys to check for indigenous artefacts before rebuilding. The Lytton First Nation, part of the Nlaka’pamux, also lost dozens of homes in the 2021 fire.

Around 60 per cent of Lytton residents were uninsured or under-insured, leading to delays in debris removal as residents and insurers grappled with who should pay. In March, the province said it would provide C$18.4 million to cover debris removal, archaeological surveys and soil remediation.

Meanwhile, residents are running out of time as the temporary living allowances provided by insurers, typically for 18-24 months after a disaster, near an end. Adding to challenges, insurers are reluctant to pay for the upgrades to homes that are being written into new building bylaws.

Sutherland said while insurers see the benefit of fire resiliency, upgrades to enhance energy efficiency and cut carbon emissions will add “tens of thousands” of dollars per home.

“When people took out insurance policies they were based on the bylaws of the day and what insurers were expecting to pay,” he added.

Building emissions account for 13% of Canada’s total greenhouse gas output and slashing them is a key part of Canadian government climate targets.

Ottawa will help make up some of the shortfall, providing C$6 million for homeowners with basic rebuild insurance who want to rebuild net-zero or fire-resistant homes.

Meanwhile, Lytton is facing yet another wildfire season. On July 14 a wildfire broke out across the river from Lytton, destroying at least six properties.

Some homeowners have had enough of delays. Tricia Thorpe, who lives just outside the village boundary is rebuilding without building permits and others are moving elsewhere.

“I’m not expecting I’ll be rebuilding ever, even though my intention was to do so,” said retired nurse Michele Feist, 59, whose 100-year-old bright yellow home burned down. “The response has been inadequate at every level. I’m not a bitter person and I try to be realistic about things, but I miss my town.”