Canada’s Trudeau to discuss ‘backsliding’ on abortion with VP Pence 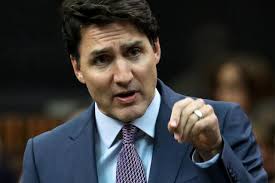 OTTAWA (Reuters) – Canadian Prime Minister Justin Trudeau said on Wednesday he would raise his concerns about “backsliding” on women’s rights in the United States and elsewhere when he meets U.S. Vice President Mike Pence, one of the most prominent American abortion opponents.

Pence is due to travel to Ottawa on Thursday to meet with Trudeau, and the bulk of their discussions were expected to focus on trade issues, like ratifying the new North American trade pact and continuing tensions with China.

But, asked by a reporter whether he would discuss abortion with Pence, Trudeau replied in French: “You all know my opinion on that. We will always defend women’s rights. I am very concerned about the conservative movement, which is beginning to take away the rights of women in the United States and elsewhere.”

Afterward Trudeau spoke in English, saying he was “very concerned with the situation around the backsliding of women’s rights that we’re seeing through conservative movements here in Canada, in the United States and around the world.”

Asked about Trudeau’s comments, a senior U.S. administration official told reporters that Pence “is proud that he serves as part of a pro-life administration.”

“We’ll see what it is that is on the prime minister’s mind tomorrow on that subject,” the U.S. official said, speaking on condition of anonymity. When he was Indiana’s governor, Pence introduced stricter abortion guidelines for the state.

Trudeau, the leader of Canada’s Liberal Party, has always staunchly supported a woman’s right to an abortion. Even Conservative Party leader Andrew Scheer, who has a slight advantage in opinion polls five months ahead of a national election, has said he would not reopen the abortion debate if elected.

In the United States numerous Republican-controlled states — including Alabama, Mississippi, and Missouri — have approved restrictive abortion laws that the Supreme Court may be called upon to rule on in the future.

The high court may then have to decide whether various state laws violate rights recognized in its landmark 1973 Roe v. Wade ruling, which legalized abortion in the United States.