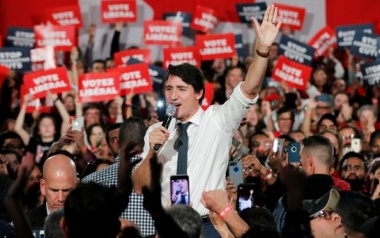 HAMILTON, Ontario (Reuters) – Canadian Prime Minister Justin Trudeau, facing the loss of his Parliamentary majority in an election next week, traded attacks with his main rival on Saturday as a bad-tempered campaign entered its last few days.

Trudeau came to power in 2015 promising “sunny ways” and a new way of doing politics but saw his popularity drop earlier this year amid an ethics scandal. Images of him in blackface emerged last month, further hurting his Liberal Party ahead of the Oct. 21 election.

Polls show the Liberals and the Conservatives in a dead heat, with neither able to capture a majority of the 338 seats in the House of Commons. That would leave the party winning the most seats seeking support of smaller parties to govern.

“I know Canadians want a strong progressive government that would stop Conservative cuts,” Trudeau told a rally in a fire station in the Ontario city of Hamilton, west of Toronto.

In the absence of an overriding narrative, dirty tactics and awkward moments have characterized the campaign.

Another example of that was on display on Saturday when People’s Party of Canada (PPC) leader Maxime Bernier said his party was considering legal action against the Conservatives after the Globe and Mail newspaper reported that the latter had hired a consultant to “seek and destroy” the PPC party and try to get Bernier barred from televised leaders’ debates.

“This is the kind of dirty politics that confuse Canadians’ faith in politics,” Bernier said at a press conference in Sainte-Marie, Quebec. “He (Scheer) is ready to steal the election with lies and manipulations.