Canada’s first coronavirus patient had symptoms on flight from China 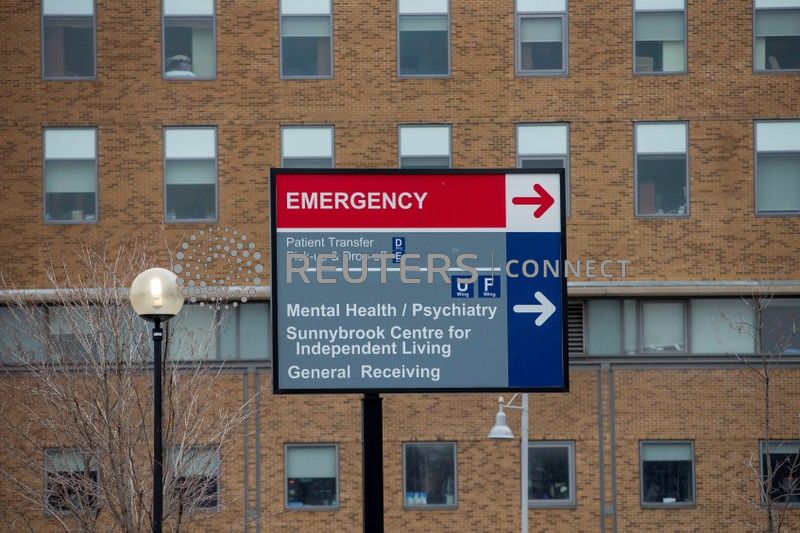 A view of Sunnybrook Hospital, where a patient is being treated in isolation for what Canadian health officials call the first presumptive confirmed case of novel coronavirus, in Toronto, Ontario, Canada January 26, 2020. REUTERS/Carlos Osorio

(Reuters) – Canada’s chief medical officer said on Sunday that an individual who was declared the country’s first “presumptive” confirmed case of the novel coronavirus had developed symptoms on the plane while traveling from Wuhan in China to Toronto.

The province of Ontario health officials on Saturday said a man in his 50s developed a respiratory illness after arriving in Toronto on Jan. 22 from Wuhan, the epicenter of the outbreak of the viral disease, and was being treated in a public hospital and in isolation.

Theresa Tam, Canada’s chief health officer, told reporters in Ottawa that the patient had mild symptoms while on the flight, though he did not report his condition after landing at the Toronto airport.

The individual arrived via China Southern Airlines flight CZ311 from Guangzhou to Toronto. Tam said health officials are in the early process of contacting other travelers on that flight.

But Tam said other people on the flight or airport that were not close to the patient should not be overly concerned.

Canada’s Health Minister Patty Hajdu told reporters that the National Microbiology Laboratory will take up to 24 hours to confirm the findings on the local laboratory. And once NML tests are confirmed positive, then Canada will announce its first confirmed case of the novel coronavirus.

Foreign minister François-Philippe Champagne on Sunday continued to advise Canadians to avoid non-essential travel to the province of Hubei, including cities of Wuhan, Huanggang and Ezhou due to the travel restrictions imposed by China following the spread of coronavirus.

He said the government is in touch with Canadians in the region and providing assistance to people on the ground. Canada does not have consular presence in Wuhan, the statement added.

Canada is on high alert to prevent the spread of coronavirus and avoid the repeat of SARS, or Severe Acute Respiratory Syndrome, that killed 44 people in Canada, the only country outside Asia to report deaths from that virus in 2002-2003. Government health officials say Canada is better prepared this time.

China’s National Health Commission said on Sunday the ability of the new coronavirus to spread is strengthening and infections could continue to rise, after more than 2,000 people were infected in China and 56 have died.