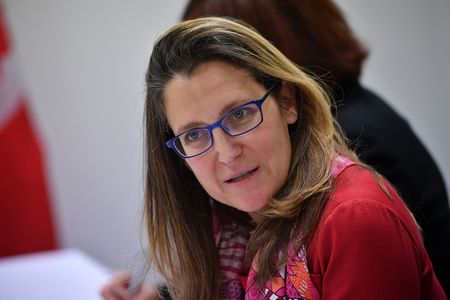 OTTAWA (Reuters) – Canadian Foreign Minister Chrystia Freeland said she will visit Cuba on Thursday to discuss the political crisis in Venezuela and the United States’ decision to allow lawsuits for property confiscated after the 1959 revolution.

“It is of critical importance that our two countries meet to discuss the economic, political and humanitarian crisis in Venezuela and the work we can undertake together to address it,” Freeland said in a statement on Wednesday.

“I also look forward to discussing how we can work together to defend Canadians conducting legitimate trade and investment in Cuba in light of the United States ending the suspension of Title III of the Helms-Burton Act,” she added.

It will be the first visit of a high ranking Canadian government official to Cuba since Prime Minister Justin Trudeau traveled there in November of 2016.

Canada vowed earlier this month to defend its businesses operating in Cuba after U.S. President Donald Trump lifted a ban on American citizens filing lawsuits against investors working on the island nation.

Canada is also one of the countries in the Lima Group, a bloc of mostly Latin American countries seeking a peaceful solution to the Venezuelan political standoff.

During her visit, Freeland also will visit the Havana embassy after diplomats there complained about mysterious bouts of dizziness, headaches and nausea.