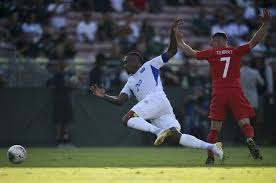 PASADENA, Calif. (Reuters) – Prolific teenager Jonathan David scored twice as Canada thrashed Martinique 4-0 at the Rose Bowl in Pasadena on Saturday to win the opening match of the Gold Cup.

Canada threatened from the outset and it felt like only a matter of time before Les Rouges would break through, which they did in the 33rd minute when David intercepted a poor back pass deep in Martinique territory and drilled it home.

Kevin Parsemain had the best chances of responding for Martinique but his 43rd minute attempt from close range went wide of the post and goalkeeper Milan Borjan thwarted his two other attempts to preserve Canada’s 1-0 lead into halftime.

David struck again in the 53rd minute when he got on the end of midfielder Samuel Piette’s long ball and fired his shot into the net off the base of the post to put Canada 2-0 up.

Experienced winger Junior Hoilett put Canada up 3-0 in the 62nd minute when he bundled the ball over the line from close range and Scott Arfield’s strike five minutes later put the game out of reach for Martinique.

“It’s an amazing feeling because I’m representing my country,” said David, who grew up in Canada’s capital city of Ottawa.

“We knew this was the first game and everyone is watching so we knew we had to make a statement today and win. And that’s what we did.”

Coach John Herdman said he was pleased to get off to a good start with the team after their biggest win in a Gold Cup match.

“We knew Martinique were going to be a challenge, particularly in transition,” he said. “But I think the players stuck to the plan and were able to take away some of the things they did.”

The match was the first in Group A, which also includes Cuba and tournament favorites Mexico, who were in action later on Saturday.