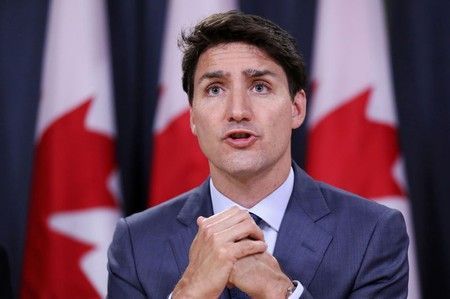 The allocation, the bulk of which will go to Ontario, was the latest development in an argument between the federal government and Ontario rooted in differences over responsibility for asylum seekers.

Since coming into power in Canada’s most populous province, Ontario Premier Doug Ford had cut funding for asylum and refugee seekers claiming it was the responsibility of the federal government, but Trudeau’s administration has pushed back.

Trudeau made his commitment to funding in the lead-up to what is likely to be a close general election in October, with the Liberals and the federal Conservatives – separate from Ford’s provincial Conservatives – running neck and neck in opinion polls.

Although Trudeau had previously given no indication that Ontario would receive any of the federal funding it had demanded, Monday’s announcement reversed that.

“Provincial cuts have thrown these vital services into jeopardy,” Trudeau said in a statement on Monday. “We’re standing up for people in Ontario, and making sure those seeking asylum have access to the legal services they need.”

Tension between Ontario and the federal government has increased as the number of asylum seekers crossing the U.S.-Canadian border has steadily increased since President Donald Trump took office in January 2017.

Legal aid societies and refugee lawyers in Ontario had condemned the Ford government’s cut at the time, and said the eradication of legal aid seriously threatened the ability of asylum seekers and refugees to a fair claim.

Janet Dench, executive director of the Canadian Council for Refugees, said she was “extremely happy” at the news.

“There was a critical need for the government to step up,” she said, adding that the Ontario government still needed to act.

Ontario Attorney General Doug Downey said on Twitter that it was “good” that Trudeau had “partially answered my call to accept responsibility” for immigration funding, but said that “funding in non-election years is also needed.”

According to Dench, the Ontario government said it receives less funding from the federal government because historically they have provided more services to immigrants waiting for asylum claims than other provinces.