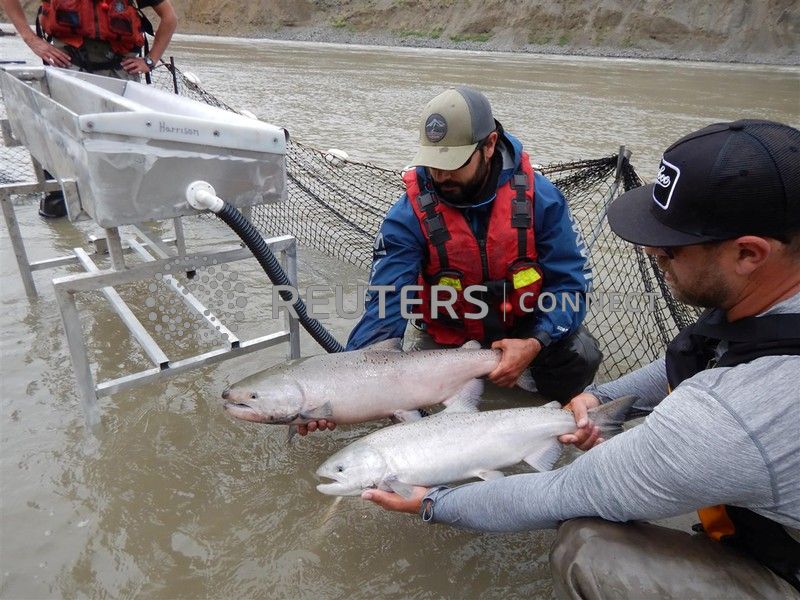 Migrating salmon, which were caught in a net, are held during a tagging operation near the Big Bar landslide on the Fraser River northwest of Clinton, British Columbia, Canada July 18, 2019. Courtesy of Incident Command Post (ICP)/Handout via REUTERS.

TORONTO (Reuters) – Canada is airlifting thousands of salmon upstream after a rockslide blocked the path of the migrating fish, triggering concerns of a permanent loss of fish populations, government officials said.

The Big Bar rockslide, which officials believe occurred in late October or early November 2018, is located in the Fraser River just north of the town of Lillooet in northern British Columbia. Because of the remoteness of the location, the slide was not discovered until late June 2019.

It created a waterfall which is preventing millions of chinook, steelhead, coho and sockey salmon from swimming upstream to their habitual spawning grounds.

The provincial and federal governments are now working with local First Nations communities to move the salmon manually upstream, by creating holding ponds that will allow them to transport the fish via helicopter to a site further upstream.

“Collaborative efforts like this one, with all partners … are crucial and will give the best chance of survival to these stocks,” Jonathan Wilkinson, federal minister of fisheries and oceans, said in a statement on Friday.

Other fish movement options being enacted are physically moving rocks from the slide to create a series of natural pools for the fish to rest in, and a fish transportation system of flexible pressurized tubes, the provincial government has said.

The fish will be monitored on their journey, including through blood samples taken to assess their energy reserves once they have passed the obstruction.