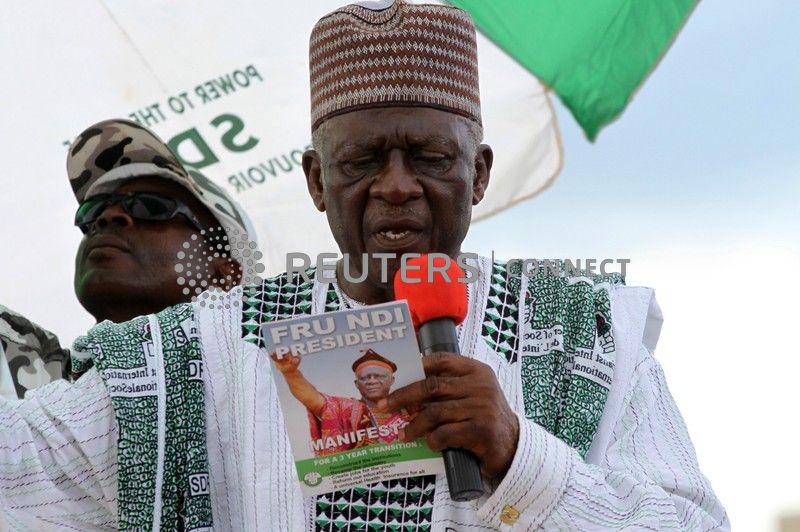 Presidential candidate John Fru Ndi from the opposition Social Democratic Front (SDF) holds his manifesto as he speaks at his final campaign rally outside the national stadium a day before Cameroon's presidential election in Yaounde October 8, 2011. REUTERS/Akintunde Akinleye/Files

YAOUNDE (Reuters) – The leader of one of Cameroon’s main opposition parties was released by his captors on Saturday after being abducted by unidentified gunmen in the country’s restive Anglophone region a day earlier, his party said.

John Fru Ndi, who heads the Social Democratic Front (SDF) and finished runner-up to President Paul Biya in the 2011 election, was taken from his home in the city of Bamenda on Friday, the second time in two months he had been kidnapped.

Jean Robert Wafo, an SDF official, said in a statement that Fru Ndi had been released on Saturday evening. He provided no details about who had taken him or where he had been held.

The SDF blamed his previous abduction in April, which lasted a few hours, on Anglophone secessionist rebels. The SDF has criticised Biya, who has served as president since 1982, for his handling of the crisis, but has not endorsed separatist demands for an independent English-speaking state.

The United Nations estimates the conflict has killed about 1,800 people and displaced over 500,000 since 2017.