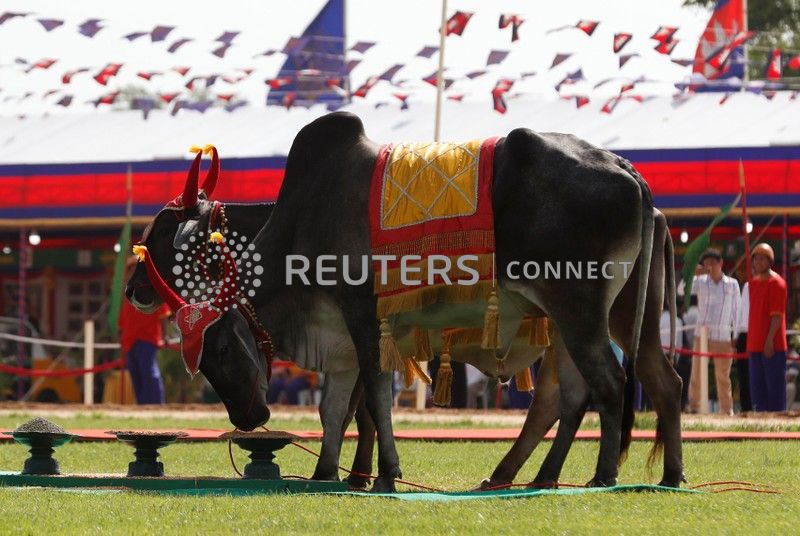 King Norodom Sihamoni presided over the televised annual ritual in which two oxen are given offerings after plowing a field, marking the start of the rice-growing season in the Southeast Asian country.

Dressed in ornate robes and colorful headdresses, the oxen ate 85% of the rice and beans on offer and 90% of the corn in decorated bowls – indicating a bountiful harvest.

Palace astrologers make their predictions each year depending on the oxen’s choice of crops and the amount they eat.

“I pray … for seasonal rain and regular weather,” Korng Ken, a Brahmin priest dressed in traditional white robes, said at the ceremony in Takeo province.

He prayed that “Cambodia avoid any natural disasters that would destroy the agriculture harvests which are the lives of the people and country.”

The good omen will be welcomed in Cambodia after the European Union imposed tariffs in January on rice from Cambodia and Myanmar in a bid to protect EU producers. Cambodia has since seen a surge in rice exports to China.

Cambodia’s ceremony mirrors similar traditions in nearby Thailand and Myanmar in which oxen ceremonially plow the ground and then choose between eating bowls of rice, beans, corn water, grass, sesame seeds or alcohol.

Thailand’s royal oxen predicted a good harvest at a plowing ceremony this month presided over by newly crowned King Maha Vajiralongkorn and his queen.