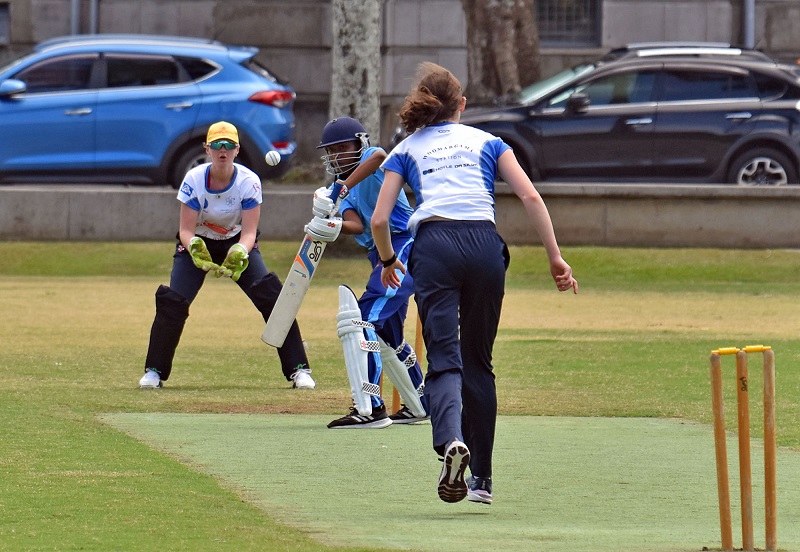 Melaia Biu of Cricket Fiji bats against Cricket Without Borders of Australia during their warm up match at Albert Park in Suva on Wednesday, September 21, 2022. Picture: JONACANI LALAKOBAU.

As the Fiji Women’s cricket team prepares for its friendly series against Vanuatu next month, it will need a lot of support.

“They are full of spirit and love the game of cricket. They are developing as they are a young team but have a lot of upside in them,” she said.

“The team would really benefit from equipment sponsorship as they are sharing cricket equipment.

“Australia does, from time to time, send cricket ambassadors out to tournaments. Players, like former Australian captain Alex Blackwell, have done this.

“The Fiji team would very much benefit from her experience in the area of strategy and batting skills.”

The Cricket Without Borders team came to Fiji to help develop the skills of its own players as well as the Fijian players.

“CWOB has a strong strategy to promote the game to girls and so CWOB went to two primary schools to do cricket skills sessions. It is very powerful for girls to play team sport as it opens up many opportunities for girls and young women.

“It is also a terrific opportunity for the Australian girls to learn about new cultures and the barriers girls can have to playing sport.

“CWOB had a fantastic experience on the tour.

“The girls from both teams have made friends. We also had two Fijian players play for our team.

“In the three T20 matches, Fiji won two and CWOB won one.”

Cricket Japan sponsored a Japanese national player to be on the tour. CWOB also has a young woman from Afghanistan, who now lives in Australia, join the tour.

“CWOB has been overwhelmed by the wonderful hospitality shown by Fiji, and hopes to bring another tour to Fiji soon,” Cannon said.

“CWOB wishes the Fiji national team all the best for its upcoming tour to Vanuatu.”

The team leaves next week and will play against against Samoa, Vanuatu and the Cook Islands.