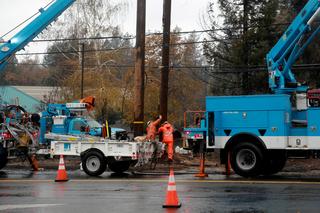 The decision by Newsom, sent to PG&E in a letter, complicates the company’s push to exit bankruptcy and provide billions of dollars to victims of devastating wildfires in 2017 and 2018 sparked by the utility’s power lines.

The embattled utility now has until Tuesday to further amend its plan to Newsom’s satisfaction, but his criticism of the reorganization package as it was presented by PG&E a day earlier was sweeping.

Newsom said the plan lacks “major changes in governance” and tougher safety enforcement mechanisms mandated under the state wildfire statute, known as Assembly Bill 1054, which was enacted in July.

The governor also said PG&E’s plan, including a proposed $13.5 billion settlement with victims of wildfires blamed on its power lines, would leave the company with a weakened capital structure and “limited ability to withstand future financial and operational headwinds.”

“In my judgment, the amended plan and the restructuring transactions do not result in a reorganized company positioned to provide safe, reliable and affordable service to its customers, as required by AB 1054,” Newsom wrote.

PG&E, in a statement after release of the governor’s letter, disputed Newsom’s findings that its reorganization plan fails to live up to the criteria of the wildfire law.

“We believe it does and is the best course forward for all stakeholders,” the company said. “We’ve welcomed feedback from all stakeholders throughout these proceedings and will continue to work diligently in the coming days to resolve any issues that may arise.”