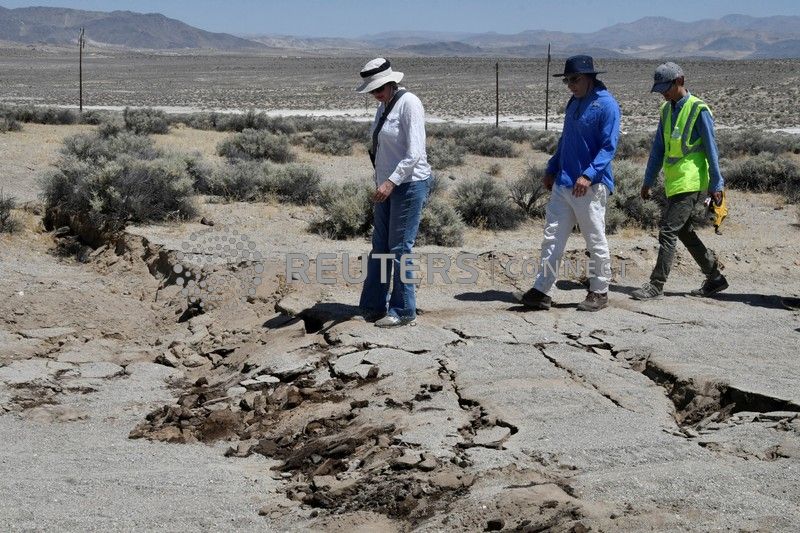 LOS ANGELES (Reuters) – California officials are spending more than $40 million on an earthquake early warning system that in addition to alerting the public could also be used to automatically halt trains and open fire station doors moments before a major tremor actually strikes.

California Governor Gavin Newsom announced after a magnitude 7.1 quake shook Southern California on Friday that the state has already installed 70 percent of the 1,115 early detection sensors it needs to have the system in place statewide.

“I think the whole state’s on notice right now about the opportunity that’s in front of us,” said Ryan Arba, chief of seismic hazards under the governor’s Office of Emergency Services (OES).

Emergency management officials have said they intend to have the statewide warning system in place by mid-2021 to serve California’s roughly 40 million residents.

In a jolt that grabbed the attention of seismically jaded Californians, Friday’s magnitude 7.1 temblor ruptured gas lines and sparked numerous fires in Ridgecrest, a remote town of fewer than 30,000 people in the Mojave Desert, about 125 miles (200 km) northeast of Los Angeles. It came one day after a 6.4 quake in the same area.

The back-to-back quakes ended a period of relative seismic calm in Southern California and brought renewed awareness to development of the state’s early warning system for earthquakes.

Japan developed the world’s most advanced earthquake early warning system after the 1995 Kobe earthquake. It relies on more than 4,000 sensors and is based on the same principles of physics that California is using to build its system.

Like in Japan, the California network is designed to detect the fast-moving seismic P-waves that are unleashed by earthquakes and can reach a sensor before the ground starts moving in a given area. Many animals are able to feel P-waves, according to the U.S. Geological Survey (USGS).

In general, communities farthest away from the epicenter of a quake would receive the most advance warning.

In a best-case scenario, a rupture of the San Andreas Fault near California’s border with Mexico would be far enough away from Los Angeles to give the nation’s second-largest city 60 seconds of warning before ground motion from the quake actually arrives, Arba said. Communities very close to a quake’s origin would receive little or no warning.

Officials in Los Angeles County in January introduced a “ShakeAlertLA” mobile phone application that can transmit an early warning to residents who have installed the app, giving them extra seconds to take cover before a major quake hits.

The “ShakeAlertLA” app was not activated for either of the Ridgecrest earthquakes because the projected intensity of shaking for Los Angeles County was below required thresholds, the U.S. Geological Survey said.

Officials plan to eventually expand the system statewide and to tie it into the operations of medical facilities, emergency responders, power companies, hazardous materials management, mass transit and other workplaces to minimize damage and injuries, according to OES.

Already, the Bay Area Rapid Transit (BART) system in and around San Francisco has connected the early detection network to its rail service to automatically slow down its trains, and hopefully reduce the risk of a derailment, if a major earthquake is about to strike, Arba said.

Southern California’s Metrolink commuter rail system halted service after Friday’s 7.1 earthquake in Ridgecrest, but orders to stop the trains only went out by radio when shaking was felt by officials at the operations center in Pomona, east of Los Angeles, Metrolink spokesman Scott Johnson said.

The Metrolink board has voted to spend $4.9 million in state funds to eventually automate the halting of its trains via the quake detection and warning system, Johnson said.

Two fire stations in the Silicon Valley community of Menlo Park in Northern California are likewise connected to seismic sensors so that detection of a large quake raises their doors, Arba said. Officials hope to have other fire stations take similar precautions.

In hospitals, an early warning system would allow doctors performing surgery to pause before shaking begins to prevent any harm to their patients, and in tall buildings elevators could be equipped to automatically descend to the ground floor, according to OES.

University of California at Los Angeles engineering professor John Wallace said the potential uses of the early warning system are widespread and have not all been mapped out.

“Once you provide the system, you’d be surprised how many ways people will find to use it to their benefit,” he said.