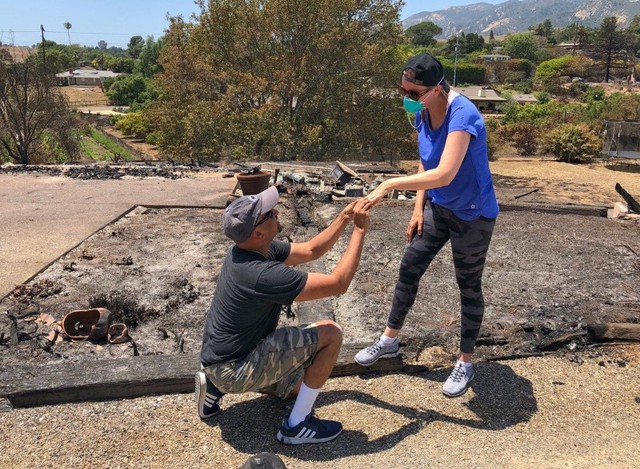 Ishu and Laura Rao, return to the rubble of their home which they lost in a wildfire, to retrieve their wedding ring, in Alameda, California, U.S., in this July 8, 2018 photo obtained from social media. MANDATORY CREDIT. Mike Eliason/Santa Barbara County Fire Department/via REUTERS

(Reuters) – Firefighters on Monday were gaining ground on California wildfires that destroyed dozens of homes and forced the evacuation of thousands of residents, but at least one couple had a bit of good news amid the devastation.

Ishu and Laura Rao returned on Sunday to the ashes of their incinerated Santa Barbara County home and found Laura’s wedding and engagement rings, which they had left behind when they fled the blaze. The rings were damaged by the heat but still recognizable, said Mike Eliason, a spokesman with the Santa Barbara County Fire Department.

“Wouldn’t have believed it, but they found them,” Eliason said. A wedding ring belonging to Ishu and Laura Rao, is retrieved from the rubble of their home which they lost in a wildfire, in Alameda, California, U.S., in this July 8, 2018 photo obtained from social media. MANDATORY CREDIT. Mike Eliason/Santa Barbara County Fire Department/via REUTERS

U.S. wildfires have so far this year already burned more than 3.3 million acres (1.3 million hectares), more than the annual average of about 2.6 million acres over the past 10 years, according to the National Interagency Fire Center.

The 100-acre (40-hectare) fire that destroyed the Raos’ home was 90 percent contained by Monday afternoon, up from 85 percent contained a day earlier, according to the California Department of Forestry and Fire Protection.

Elsewhere in the state, firefighters held the lines against blazes feeding off the dry brush in the heat, which have left at least one person dead and three others injured, Cal Fire officials said.

Firefighters should get some more good news this week with cooler temperatures in the forecast, the National Weather Service said. Scorching heat, high winds and low humidity have fanned dozens of fires across the western United States this summer.

The remains of an unidentified person were found on Friday near a home burned to the ground by the Klamathon fire, which broke out on Thursday near California’s border with Oregon. It marked the first fatality of the fire season in California.

A firefighter injured while battling the blaze has since been released from the hospital, authorities said on Sunday.

The Klamathon fire, which injured at least three people, destroyed 81 buildings and blackened more than 35,000 acres, was 30 percent contained on Monday compared with 25 percent on Sunday, according to Cal Fire.