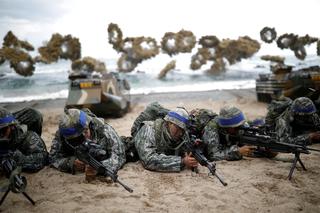 SEOUL (Reuters) – South Korea and North Korea have continued to pour resources into modernizing their militaries despite a frenzy of diplomacy since 2018, data shows, creating a point of tension that has sharpened as talks have stalled.

Military buildups on both sides of the heavily fortified border between the two nations have come to the forefront with recent short-range missile launches by North Korea, perfecting an arsenal it says is necessary to defend against new South Korean weapons.

In a commentary on Friday, North Korean state news agency KCNA said South Korea’s pursuit of new weapons systems is an “unpardonable act of perfidy” that threatens to undermine peace on the peninsula.

South Korea’s Ministry of National Defence (MND) did not respond to requests for comment.

South Korean President Moon Jae-in’s administration has committed billions of additional dollars to the country’s defense budget, which is already among the largest in the world.

In 2018 South Korea’s military expenditures reached $43.1 billion, an increase of 7 percent compared with 2017, according to the MND. It was the biggest single-year jump since a 8.7 percent increase in 2009.

In July the MND announced South Korea would build a light aircraft carrier, the country’s first. And in August it unveiled a plan to spend about $239 billion more between 2020 and 2024.

About $85 billion of the future budget is earmarked for arms improvements, representing an average 10.3 percent year-on-year increase.

“Given the recent uncertain security environment, the government is investing heavily in strengthening its defense capabilities,” the MND said when the plan was announced.

By 2023, the “force enhancement” budget will account for more than 36% of total defense spending, up from about 31% this year, according to South Korea’s 2018 Defense White Paper.

“Neither Korea wants to a full-blown confrontation, but both want to make sure they have the weapons platforms and defense resources available in the event a flare-up happens,” said Daniel DePetris, a fellow at Defense Priorities, a Washington-based think tank.