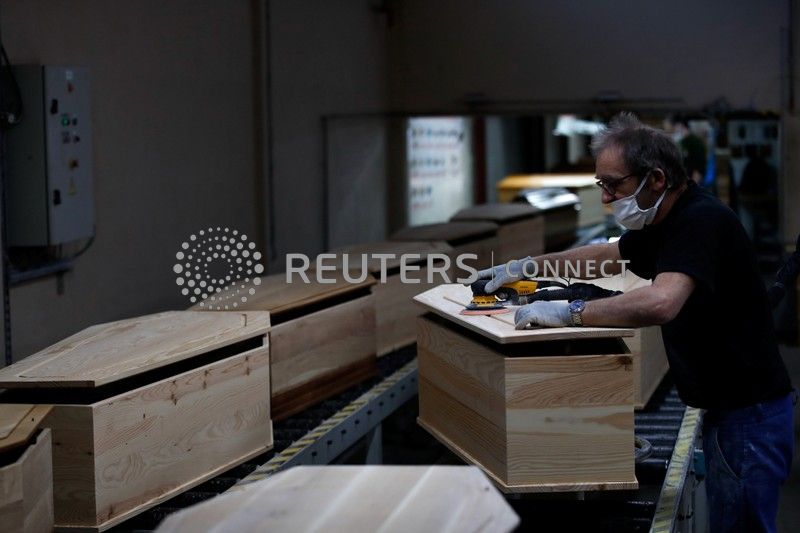 FILE PHOTO: An employee works at the coffin manufacturing plant OGF in Jussey as the spread of the coronavirus (COVID-19) disease continues in France April 2, 2020. REUTERS/Gonzalo Fuentes

JUSSEY/PARIS (Reuters) – Two hauliers load their lorries with what is fast becoming a precious commodity in France as the coronavirus pandemic takes its dreadful toll – coffins.

While most businesses have shut their doors as part of a national lockdown designed to slow the spread of the disease, the coffin-making factory in the sleepy town of Jussey in northeastern France can barely keep up with the orders.

France has confirmed nearly 60,000 cases of the coronavirus and as of Friday 5,387 deaths, the fourth highest tally in the world.

“Given what’s happening, the pace of production is going up by 50 coffins a day,” Emmanuel Garret, manager at the OGF plant, told Reuters. “We’re going up from 360 to 410.”

The group, which also has a factory near the Alps in eastern France, churns out about 144,000 coffins a year, making it the country’s biggest producer.

The Jussey plant manufactures 80,000 oak and pine caskets for the French market. It is not short of wood as there are about 60 square kilometres of forest in the adjacent area.

The town of just 1,600 inhabitants lies between Paris and the east of France, regions at the epicentre of the outbreak that account for more than half of the country’s death toll.

“It’s clear that in terms of activity, it’s where the demand is now strongest,” Garret said.

Inside the factory, the 120 employees beaver away assembling coffins that usually sell for between 700 euros ($756) to 5,000 euros a piece.

That will change as the surge in demand has pushed the plant to focus on the simpler units, Garret said.

Keeping a safe distance from each other and regularly disinfecting the work space, the employees all wear masks. The company commissioned local seamstresses to make them due to a chronic shortage caused by the global pandemic.

While the conveyor belts turn and robots finish off the varnishing in Jussey, more than 300 km (186 miles) away in Paris, preparations are underway for a wave of deaths with more than 2,200 people on life-support in regional hospitals.

At the Rungis food market, the largest in Europe, local authorities on Friday were converting a hall into a mortuary to hold 1,000 coffins and side rooms for families to say farewell to their loved ones for the last time.

“This is not a video game, this is reality,” Paris police chief Didier Lallement said. The makeshift morgue was to ensure there would be capacity if needed, he added.

Nathalie Vounikoglou, saleswoman for Bernier, one of the five casket distributors in the Paris region, said demand from funeral parlours had jumped by 20 percent in the past two weeks.

“We have occasional shortages of low-end models in standard size because there are no more ceremonies and so families go for the least expensive,” she said.

Some nursing homes and hospitals do not want to hold onto the bodies of coronavirus patients, Vounikoglou said, meaning there has to be a quicker turnaround.

Funeral parlours are ordering coffins at a day’s notice rather than the four or five previously, out of concern they could fall short.

“For the moment, we are restocking for the next morning,” Vounikoglou said.