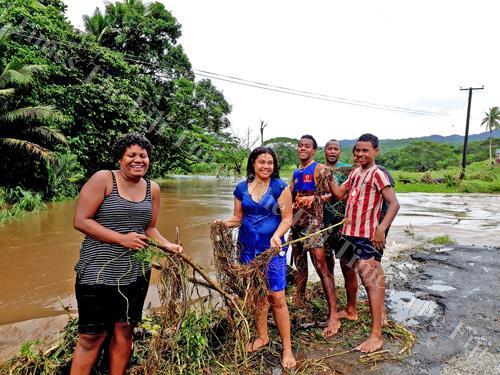 PEOPLE have started clearing debris brought in by the flood at Bulileka Village outside Labasa Town.

Eloni Tuvuki of Bulileka said they had started clearing debris to make it easier for motorists to cross the road when the weather clears out.

“We started with our clean-up after lunch when the water level went down,” he said.

Mr Tuvuki said all the children from their area volunteered to clear up the debris.

“We gathered youths and all other children volunteered to help clear up the debris,” he said.

“We are glad that the water has receded and we can’t wait for the good weather so we can return to normality.”

Mr Tuvuki said even though some Irish crossings were still underwater, they had managed to clear out debris from other crossings that were no longer flooded.

“Most debris are from fallen tree beside the river, brought by the flood,” he said.

Meanwhile, residents of Bouma Settlement in Labasa were safe from the flash flooding.

Rajnesh Chandar of Bouma Settlement said they were lucky that the water level only reached up to their door step.

“This place used to go underwater and we would run to the nearest evacuation centre, but this year we were lucky that we were spared,” he said.