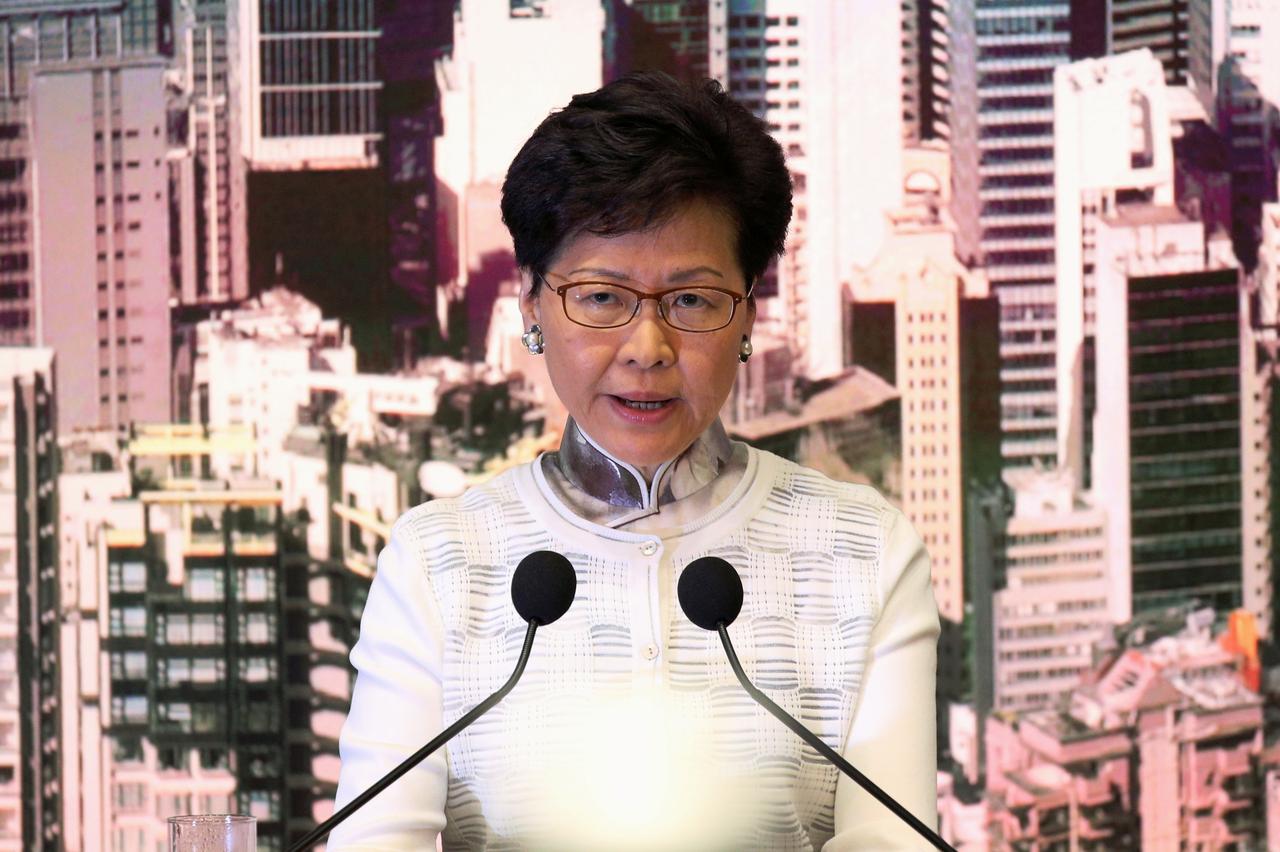 HONG KONG/BEIJING (Reuters) – With an escalating U.S. trade war, a faltering economy and tensions in the South China Sea vexing her bosses in Beijing, Hong Kong leader Carrie Lam appeared in no mood to compromise on a planned extradition law at recent meetings, according to foreign envoys and business people who met with her.

Some of the people at those meetings in recent weeks pointed to media reports that even Hong Kong’s usually reticent judges were worried about the proposed law which threatened to send people for trial in mainland China for the first time.

But Lam bluntly dismissed concerns about a Chinese justice system that is widely criticized for forced confessions, arbitrary detentions and one-sided trials, saying judges were not supposed to speak.

Worries over the bill’s impact on Hong Kong’s international standing as a financial hub with a respected legal system were building in Washington, London and other European capitals, but Lam stressed the need for the extradition law to help solve the murder of a Hong Kong woman in Taiwan.

“She needed a dinghy and she deployed the Titanic,” one diplomat who met Lam this month told Reuters, declining to be identified due to the sensitivity of the issue.

In numerous public appearances after that, Lam was unyielding on the need for the bill, despite huge and sometimes violent street protests including one last Sunday that organizers said drew more than a million people.

Then on Saturday, Lam suddenly announced the bill had been postponed indefinitely.

She told a news conference she felt “deep sorrow and regret that the deficiencies in our work and various other factors have stirred up substantial controversies and disputes in society”.

Hong Kong’s self-styled Iron Lady had cracked, having apparently created an entirely fresh crisis for President Xi Jinping – and the city’s biggest since Britain handed it over to Chinese rule in 1997 with the guarantee its freedoms and autonomy would be preserved.

Clues to the catalyst for the about-face may lie in a reported meeting between Lam and China’s Vice-Premier Han Zheng.

According to Hong Kong’s Sing Tao newspaper, Lam had a clandestine emergency meeting with Han, a member of the Politburo’s seven-person Standing Committee, China’s top decision-making body, across the border in Shenzhen on Thursday.

The content of the meeting is unknown. Lam on Saturday refused to confirm or deny that it had taken place, despite repeated questions.

He warned in 2017 that any attempts to undermine Chinese sovereignty were a “red line” that Beijing would not allow to be crossed – warnings that reinforced his strongman image amongst Hong Kongers.

Many politicians, diplomats and analysts had not expected Beijing to allow any backdown on the bill, unlike in 2003 when contentious national security laws were scrapped after half a million people took to the streets.

But a source in Beijing with ties to China’s leadership who meets regularly with senior officials, said the Hong Kong government had handled the extradition saga badly.

And while a backdown from Beijing on the bill seemed near inconceivable just a week ago, the violence and escalating unrest forced their hand.

“The outcome doesn’t bear thinking about if this situation wasn’t turned around,” the source said, also declining to be named given the sensitivity of the matter.

The source added that Beijing now had severe doubts about Lam’s capabilities. China’s State Council and the central government’s liaison office in Hong Kong did not immediately respond to Reuters requests for comment.

Steve Tsang, a London-based political scientist, said Lam had caused Xi “major embarrassment” at a time that is not helpful for him given trade tensions with the United States, and ahead of a possible meeting with U.S. president Donald Trump at the month’s end at the G20 summit in Japan.

“Xi is not a leader who tolerates failures of officials,” Tsang said.

Retired senior Hong Kong government official Joseph Wong said he was shocked by Beijing’s U-turn, but the situation had become so untenable that he believed it had led to a recalculation by Han after meeting Lam in Shenzhen.

“I suspect … he (Han) would have had to consider, are we prepared to continue to fire rubber bullets or even real bullets in order to get this through, and what would be the implications for the central government internationally, vis-a-vis the U.S. So that protest was the turning point.”

Lam has refused calls from the opposition and protestors to step down but her ability to govern has been questioned on numerous fronts, including her failure to gauge the pulse in Hong Kong, the broader U.S.-China relationship, and Taiwan’s refusal to accept any extradition bill, undermining her core argument the bill would resolve the Taiwan murder case.

Political scientist Tsang said he did not expect Lam to last much longer as leader.

“I think Carrie Lam’s days are numbered…Beijing cannot afford to sack her right away because that would be an indication of weakness. They would have to allow for a bit of decent interlude.”

Two former post-colonial leaders, Tung Chee-Hwa and Leung Chun-ying, were forced to truncate their terms of office from various controversies linked to policies that stoked fears of Chinese encroachment on the city’s freedoms.

For her part, Lam has asked for time so that the bill can be properly deliberated.

“Give us another chance and we will do this thing well,” she told Saturday’s news conference.

Asked about China’s leaders, she said: “They have confidence in my judgment and they support me.”