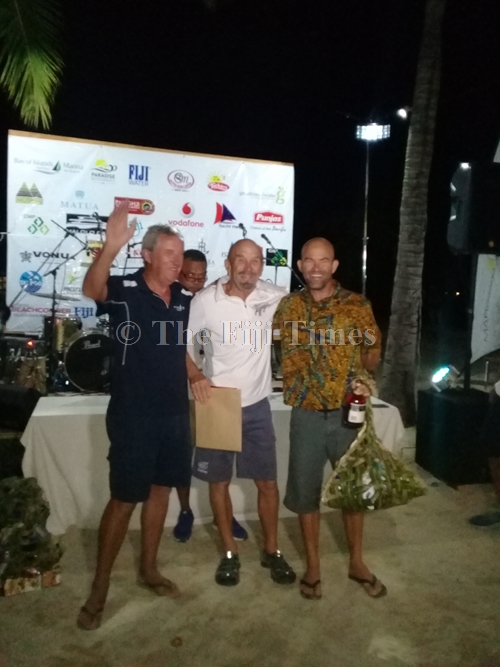 GRAHAME Brown, 71, was on cloud nine after teaming up with his son Graig to win the Fiji Regatta Hobie Cat race at Musket Cove on Wednesday.

Grahame said he had been competing in annual regatta week for a decade, but failed to win any race. This year he is the happiest man after the race.

He finished fifth in the past two years and was eager to return next year.

“This regatta race is fantastic and this is the 10th year we have been coming for the event,” said Grahame.

“We love the event and it gets better and better every year. “This is the fourth year we have been trying to win and we were thrilled to win. We did not expect it. We will be back next year to defend our title.”

Grahame said he first visited Musket Cove in 1984, but there was no regatta race then.

He said he was also impressed with the hard work being done by the staff at Musket Cove Island Resort in hosting the more than 200 yachts that competed at the annual event.

“My first year was in 1984 when Musket Cover was tiny then.

“There was no Denarau and no Vuda Point Marina and we didn’t do the regatta then.

“The competition gets better and there are more international boats, clean waters, smiling Fijian faces, good wind and nothing to complain about. I believe the competition will be bigger next year,” he added.