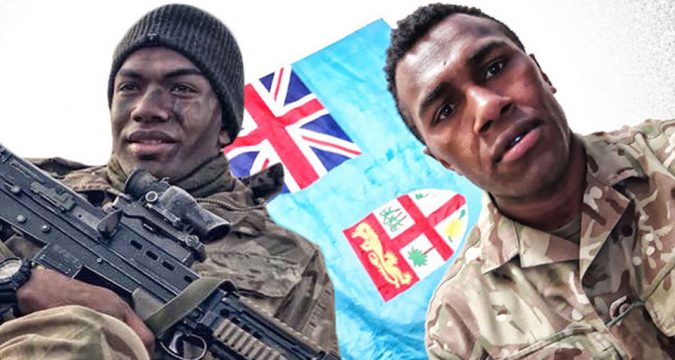 From farming backgrounds to the battlefields, Fijians Robert Matamosi and Emosi Nadaubale are making their names in Europe in the League One competition in the United Kingdom.

They are working their way up the ladder to be part of the Super League competition. The duo left Fiji in 2017 not knowing each other, but became best friends in their line of duty in the 9 Regiment RLC and now they’re key players in their West Wales Raiders. Nadaubale is from Waibasaga Village, Wainimala in Naitasiri and his brother in arms Matamosi is from Taveuni.

They came from farming and village backgrounds. They shared their stories with The Fiji Times and Total Rugby League acknowledging their journey from their life as farmers to living a better standard in the UK.

The pair might be the fighting force to fire West Wales Raiders forward.

They’ve overcome personal atrocities and showed solid mettle in their service with the British Army, all worthwhile experience to assist with the League One strugglers’ war of attrition.

Much like compatriot and fellow serviceman Ratu Naulago, whose rapid assault on Super League with Hull FC has gathered plenty of plaudits, Nadaubale and Matamosi are starting their mission to establish themselves in the sport.

The Raiders drafted the pair last year, after resilient performances for the Army Rugby League side in a 32-39 victory over Keighley Cougars reserves last March.

Since then, winger Matamosi has featured five times for the club, one more than centre partner Nadaubale, and has crossed for three tries.

“We joined last year and we’ve really enjoyed it,” said Matamosi. “I’ve been enjoying playing the game again because back in Fiji I loved to play Rugby League.

“Emosi and I are together in the 9 Regiment RLC and we didn’t know each other before we moved to the UK. There are quite a few Fijians in our regiment and we have become great friends.”

That closeness between the two has culminated in a solid pairing on the right flank for West Wales Raiders, one that was forged at the 2019 Army Tri-Nations in Australia where the British Army lost 32-24 in the final to the hosts.

While Matamosi has the 13-man code ingrained into his DNA, Nadaubale was a union player and only played his first game of Rugby League in the UK.

But the two do have an agricultural background in common, the most frequent occupation in Fiji, and a desire for better opportunities in heading for the UK.

Sadly for Naudabale, in particular, that didn’t come without personal obstacles.

His siblings were all similarly eager to join the British Army and had to stick together as a unit when they lost their mum last year – six years after their father also passed away.

“The army gives us a great opportunity to come over and work because we don’t have that in Fiji and we can join easily because it’s a Commonwealth country. I always dreamed of joining the army and my brother and sister joined up and my two younger brothers have since. There are five of us together here. One of my younger brothers is in the same regiment, as well. My dad passed away in 2011 then my mum left us last year. She came over on a visitors’ visa. She was a proud mum. She came to see three games when she was here. I’m really happy that she got to see all her children that are in the army.

“In Fiji, I lived on a farm. That was our only source of income. After my education, I went back to look after my younger brothers and I got them through college and helped my mum. Look at us now.”

Nadaubale has been in the local rugby system playing local tournaments before joining the British Army.