British cigarettes, a body in the road: memories of D-Day 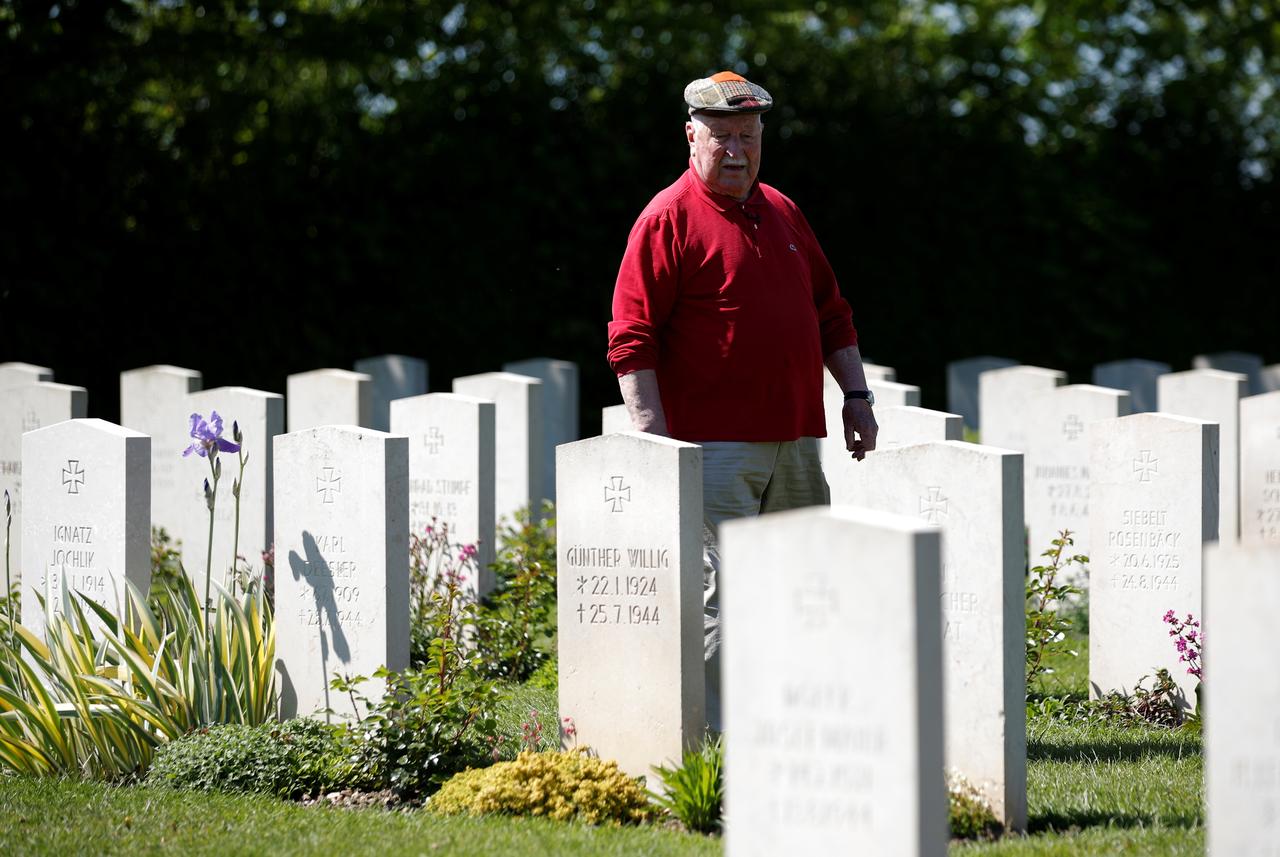 Yves Faucon, 86, from Tilly-sur-Seulle in the Normandie region walks amongst graves of German soldiers as he visits his town's military cemetery during an interview with Reuters in Tilly-sur-Seulle, France, May 14, 2019. REUTERS/Christian Hartmann

TILLY-SUR-SEULLES, France (Reuters) – It is the sounds and smell of war that are indelibly imprinted in the memory of Yves Faucon, who was 12 when allied troops landed in Normandy and set about driving Nazi Germany’s forces out of France.

“I remember seeing a German body lying on the road and a column of British tanks advancing. One ran over the body,” recalled Faucon, now 87. “It made a grim noise.”

Faucon’s village of Tilly-sur-Seulles, south of Bayeux, lay on the frontline of the allied push towards the city of Caen. The village was won and then lost by the British more than 20 times over a three-week period.

“One morning some Brits arrived and chatted with us. I’ll always remember the smell of their English tobacco. It wasn’t something we were used to.”

More than 150,000 allied soldiers stormed the Normandy beaches on June 6, 1944, bursting through German coastal defences to open the way to the liberation of western Europe from the Nazi regime.

Seventy-five years later, French President Emmanuel Macron, U.S. President Donald Trump and British Prime Minister Theresa May will attend ceremonies to mark the anniversary of the largest seaborne invasion in history and the soldiers who gave their lives.

Faucon’s widowed mother ran their family-owned hotel in Tilly-sur-Seulles. It was requisitioned by the Germans and as many as 250 German soldiers were holed up in the building. One lunchtime, Faucon said, Field Marshal Erwin Rommel, who commanded the 7th Panzer Division during the 1940 invasion of France, ate there.

“A German soldier watched on as she (Faucon’s mother) cooked for Rommel. She said to him: ‘If I was going to poison a German I would have done it already’.”

Faucon was awoken at dawn on the morning of the landings by a schoolmaster who told him to dress quickly and grab a blanket, as the incessant pounding of artillery on the coast 20km (12.4 miles) north reverberated through the air.

“They put us in a roadside ditch. We hid there the whole day, 80 of us,” said Faucon, who still lives in the village that lay in ruins by the time it was liberated. “The first English soldiers we saw were flanked by Germans. They were prisoners.”

The British forces suffered heavy losses in the battle for control of Tilly-sur-Seulles, fighting which forced the Faucon family to seek refuge in neighbouring villages and remote homesteads.

Outside Tilly-sur-Seulles, flowers are planted at the feet of more than 1,200 crosses in a manicured war cemetery, most of them marking the final resting place of British soldiers.

“When you read these headstones, many of them say ‘Rest in Peace’. But they didn’t know peace,” said Kenneth Loughman, a retired U.S. navy chaplain who served in Vietnam and was visiting the region’s memorials. “We gotta end going to war.”