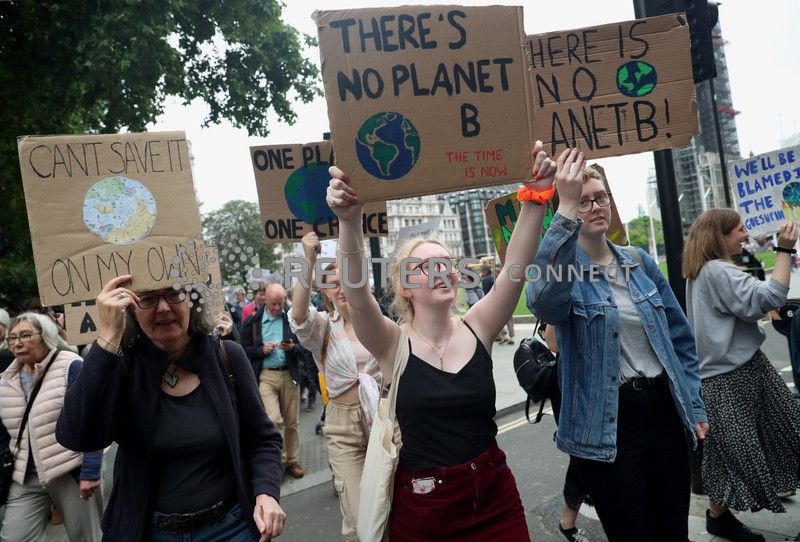 LONDON (Reuters) – Britain’s new target to reach net zero greenhouse gas emissions by 2050 became law on Thursday, making it the first among the major G7 countries to set such a goal.

Outgoing Prime Minister Theresa May had announced the target earlier this month, saying the plans were ambitious but crucial for protecting the planet for future generations.

The move will require huge changes such as more renewable electricity generation, phasing out new petrol and diesel cars by at least 2035 and a 20 percent cut in beef and lamb consumption.

“The UK kick-started the Industrial Revolution, which was responsible for economic growth across the globe but also for increasing emissions,” said Chris Skidmore, energy and clean growth minister.

“Today we’re leading the world yet again in becoming the first major economy to pass new laws to reduce emissions to net zero by 2050,” he said.

The net target replaces a previous goal to cut the country’s emissions by 80 percent compared with 1990 levels by 2050, a target campaigners said did not go far enough to meet pledges made under the 2015 Paris climate agreement to try to limit a rise in global warming to 1.5 degrees Celsius.

Climate group Extinction Rebellion, which carried out weeks of civil disobedience earlier this year, believes the new target still does not go far enough and wants a net zero target to be met by 2025.

Britain’s greenhouse gas emissions have fallen 43.5 percent since 1990 largely due to a rapid increase in renewable power such as wind and solar, and a move away from polluting coal plants.

The country’s windy coastlines in particular have proved to be an ideal host for large wind projects, with the northwest coast of England home to the world’s largest offshore wind farm, Orsted’s <ORSTED.CO> Walney Extension.