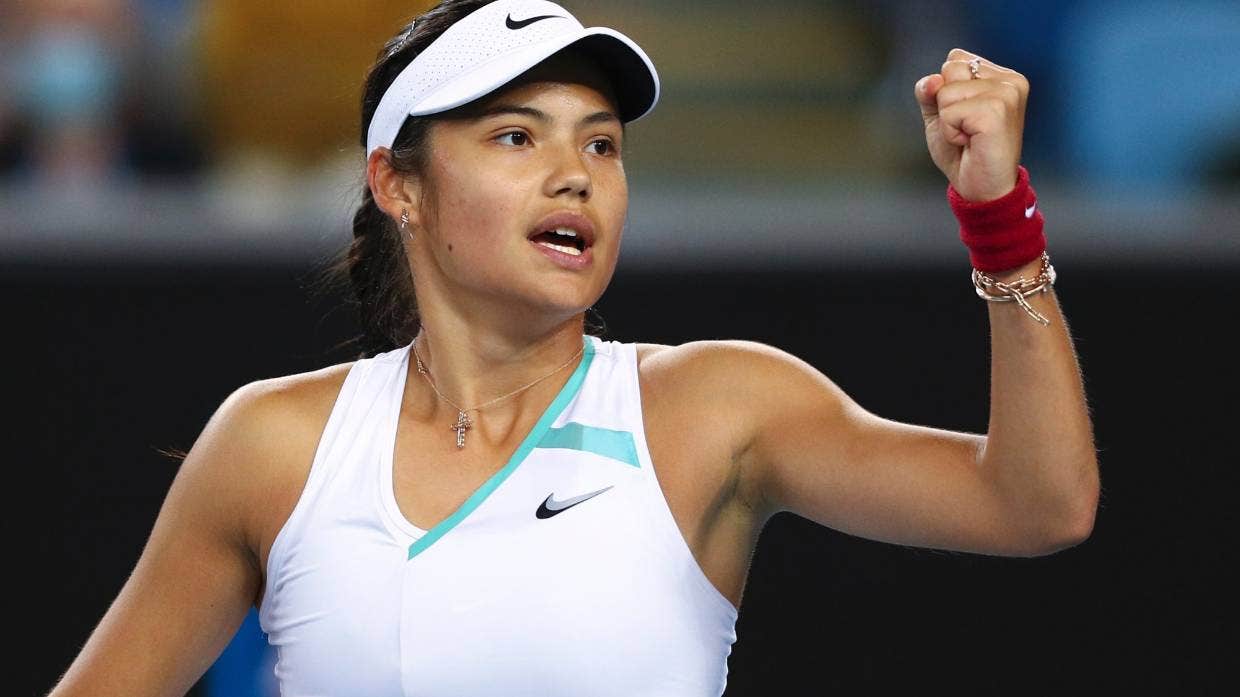 Emma Raducanu of Britain reacts after winning a point against Sloane Stephens of the US on January 18, 2022. Picture: STUFF SPORTS.

Teenage tennis sensation Emma Raducanu beat experienced American Sloane Stephens in her debut at the Australian Open on Tuesday, with fellow Briton Andy Murray also scoring his first win at the tournament for the first time since 2017.

Raducanu won 6-0, 2-6, 6-1 in a topsy-turvy contest which saw Stephens capitalising on some of the young athlete’s errors in her second set.

“It was a tough match-up for a first round, her athleticism is right up there, so I’m just happy to get through,” said Raducanu, who was under the eye of new coach Torben Beltz.

“In the first set I played some great tennis with very few errors. Of course there was going to be some adversity and I was happy to regroup in the third set,” she said. “I don’t think the score reflected the match really as I was really feeling it.”

The former No 1-ranked Murray, playing thanks to a wild-card invitation as he continues his career comeback from hip operations and thoughts of retirement, beat 21st-seeded Nikoloz Basilashvili 6-1, 3-6, 6-4, 6-7 (5), 6-4 on Tuesday to reach the second round at Melbourne Park.

He lost a five-setter in the first round in 2019 – a match he, and everyone else, thought might have been his last in Australia – after missing the 2018 edition with an injury. He missed the 2020 tournament with a pelvic injury and last year’s event because of COVID-19.

“It’s been a tough three, four years. Put in a lot of work to get back here,” Murray said in his post-match TV interview at John Cain Arena, which was formerly known as Hisense and is parochially referred to as the People’s Court.

“I’ve played on this court many times, the atmosphere is incredible. This is the one where I thought I’d played my last,” he said. “Amazing to be back, winning a five-set battle like that. Couldn’t ask for more.”

Murray beat Basilashvili in a three-hour three-setter last week in Sydney, where he reached the final of the tuneup tournament. This one went almost four hours.

Murray’s wasn’t the only dramatic five-setter that finished in the early evening on Day 2.

Second-seeded Daniil Medvedev, one of the biggest potential beneficiaries of Novak Djokovic’s deportation, had a much more routine first round.

Nine-time champion Djokovic was already back in Serbia – two days after losing his legal challenge to stay in Australia despite being unvaccinated against Covid-19 – when Medvedev went into Rod Laver Arena for a 6-1, 6-4, 7-6 (3) win over Henri Laaksonen.

Aiming to be the first man in the Open era to win his second major title in the very next Grand Slam appearance after his first such trophy, Medvedev advanced along with No. 4 Stefanos Tsitsipas, No. 5 Andrey Rublev, No. 11 Jannik Sinner, No. 13 Diego Schwartzman and No. 15 Roberto Bautista Agut.

That’s where things could get more tricky: He next faces the mercurial Australian Nick Kyrgios.

Nobody has dominated in Melbourne like Djokovic, who is unbeaten in the 18 combined semifinals and finals he’s reached at the Australian Open, including last year’s victory over Medvedev for the title.

But Medvedev avenged that with his breakthrough major title at the US Open, where his victory meant Djokovic’s bid for a calendar-year Grand Slam finished one win short.

“I like pressure,” Medvedev said. “Always want to do better than I did last year, (but) it’s not going to be easy.”

That’s something Leylah Fernandez has had to confront.

The 19-year-old Canadian lost 6-2, 6-4 to 133rd-ranked wild-card entry Maddison Inglis in her first Grand Slam match since her runner-up finish at the US Open.

The venue and the vibe were a long way from her run to the final against Raducanu at Flushing Meadows last September.

Second-seeded Aryna Sabalenka appeared to be on the way out before she rallied from a set and a break down, winning nine straight games before completing a 5-7, 6-3, 6-2 win over No 128-ranked Storm Sanders.

Third-seeded Garbiñe Muguruza, meanwhile, kept a perfect streak intact when she won her first-round match at the Australian Open for the 10th straight time, beating No 77-ranked Clara Burel 6-3, 6-4.

“Very tricky. You’re always nervous going out there on Rod Laver, which I love, and starting a Grand Slam campaign,” Muguruza said. “Very happy the way I played and, of course, controlling the nerves.”

Muguruza, a two-time major champion who was the 2020 runner-up in Australia, next plays French veteran Alize Cornet.

Two-time Wimbledon champion Petra Kvitova lost to Sorana Cirstea for the second straight year, this time 6-2, 6-2 in the first round.

“Yeah, I think that she likes my game, that she just is going for it,” said Kvitova, an Australian Open finalist three years ago. “But the season is long, so I hope that it will turn around.”`