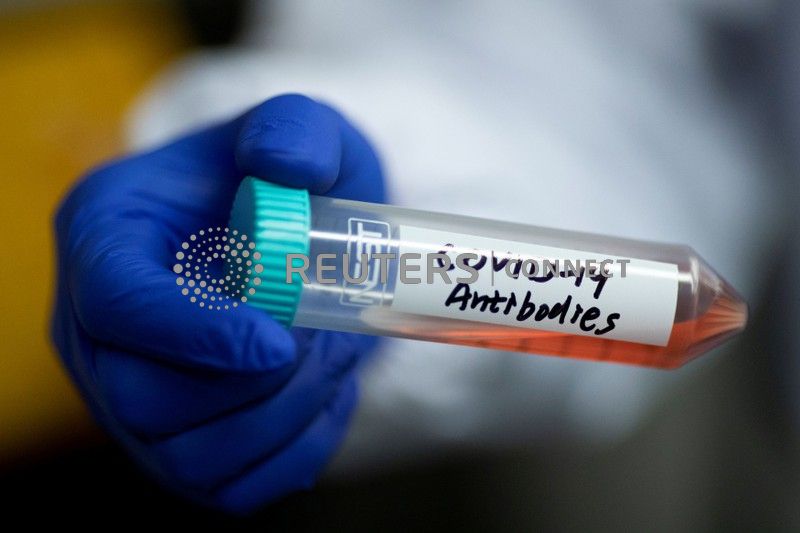 FILE PHOTO: Scientist Linqi Zhang shows a tube with a solution containing COVID-19 antibodies in his lab where he works on research into novel coronavirus disease (COVID-19) antibodies for possible use in a drug at Tsinghua University's Research Center for Public Health in Beijing, China, March 30, 2020. Picture taken March 30, 2020. REUTERS/Thomas Peter/File Photo

LONDON (Reuters) – British regulators will this week reveal approval criteria for firms offering new coronavirus antibody tests, touted by governments in Britain and elsewhere as critical to easing nationwide lockdowns without helping the virus to spread.

Antibody tests show whether people have been infected with the novel coronavirus and developed immunity – potentially allowing them to return to their places of work.

The British government has provisionally ordered 17.5 million of them, but health minister Matt Hancock has said some of those already being trialled work poorly, and that one test even missed three out of four cases.

Brigette Bard, chief executive of the diagnostics firm BioSure, said that her firm’s at-home test could not get as far as a formal trial as she had received no details of the approval criteria.

“How they fail tests when there is no specification, I literally have no idea. We have been begging to be told what to do. We have a test ready to submit,” she said.

“We need to get our test approved, and they’re not giving us an option of how to get it approved.”

BioSure has been producing an at-home HIV test since 2015, and Bard met Prime Minister Boris Johnson in March to discuss her COVID-19 test.

At-home tests, in this case of blood obtained by pricking a finger, are designed to be read by the person taking the test, whereas others need results to be read in a lab.

Bard said laboratory trials were producing good data, but that the firm needed to know what size and scope of trial and what accuracy level would be accepted by regulators.

Doris-Ann Williams, chief executive of the British In Vitro Diagnostic Association, said that clarity would be coming soon.

“There will be specifications released for tests this week by MHRA (the Medicines and Healthcare products Regulatory Agency) which will help companies understand the technical performance expected for their kits,” she said in an email.

The MHRA itself said it was developing the specifications but declined to give a timeline.

Once criteria were established, Bard said the trials would take one or two weeks, and then BioSure could begin production, subject to approval, with the aim of making 1 million tests a month.

“If our test fails the validation, then it’s not fit to go to market,” she said. “I’m happy to go through whatever validation they want us to go through.”