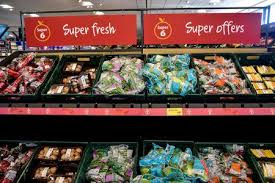 LONDON (Reuters) – Britain faces a fresh food bottleneck if it drops out of the EU without a deal, the country’s largest supermarket group warned on Thursday, echoing comments from its biggest rival the previous day.

As the country counts down to Brexit while politicians remain deadlocked over how best to oversee its departure on March 29, Tesco said it had increased stockholdings of ambient foods such as bottles, packets and tins and made clear plans for each product category.

But, with Britain importing about half the fresh food it eats, putting no-deal contingencies in place for perishables was not an option.

“It’s not so possible to do that sort of thing on fresh food, so that’s where the pinch point would be if there were to be a no-deal,” Chief Executive Dave Lewis said.

On Wednesday No. 2 supermarket player Sainsbury’s, which imports about 30 percent of its food from continental Europe, issued a similar warning.

“It will be hugely disruptive if there was a no-deal Brexit for the supply chains that we operate…,” its Chief Executive Mike Coupe said.

“No amount of stockpiling will mitigate that risk simply because we don’t have the capacity and neither does the country to stockpile more than probably a few days’ worth.”

The uncertainty over Brexit looks set to deepen on Tuesday, when a divided parliament is expected to vote down the departure deal that Prime Minister Theresa May struck with Brussels.

May has said a vote against would be opening the way for a disorderly exit or for Brexit not to happen at all, while opposition Labour leader Jeremy Corbyn called on Thursday for an election to break the impasse.

Supermarket groups, under pressure to keep shelves stocked with hundreds of thousands of product lines, want as little friction as possible at European borders

They fear a no-deal Brexit could mean major delays at ports.

Analysts pointed out that in 2018 it only took a few days of heavy snow disruption when the “Beast from the East” hit Britain before gaps opened up on supermarket shelves.

They also say that any pinch in supply will likely result in price increases in fruit, vegetables, meat and dairy products.

No. 4 supermarket player Morrisons said on Tuesday its Brexit planning group had moved to “a more operational footing,” while on Thursday Marks & Spencer said it had “upped the ante” and started to make choices.