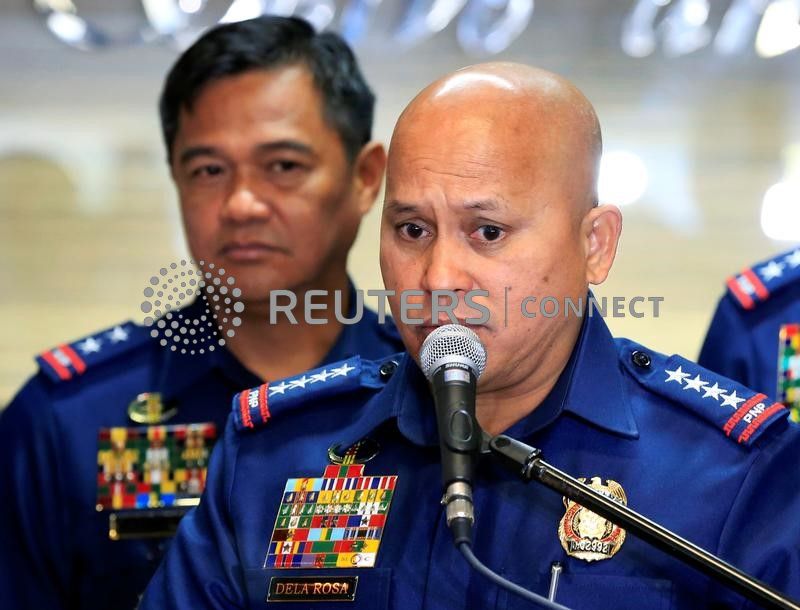 MANILA (Reuters) – The top enforcer of a brutal war on drugs in the Philippines on Friday dared prosecutors to go after him for the deaths of thousands of people, after activists warned that his election to the Senate could insulate him from legal action.

Ronald dela Rosa, President Rodrigo Duterte’s top lieutenant in a crackdown that alarmed the international community, shrugged off calls for him to be investigated for what human rights groups say were systematic police cover-ups, falsified reports and summary executions.

The former national police chief, nicknamed “Bato” (rock), was endorsed by Duterte in a May 13 election in which he is all but certain to win a seat in the powerful Senate.

“Bring it on, bring it on. Whatever they want, I will not run away,” dela Rosa told news channel ANC when asked about a possible probe, including by the International Criminal Court (ICC) in the Hague.

Duterte’s allies swept the midterm polls in what was seen as a ringing public endorsement of the president’s controversial rule and the war on drugs that has defined it.

Dela Rosa and the government insist the more than 5,000 suspected drug dealers whom police have killed in anti-narcotics operations had all put up a fight.

“We have to protect ourselves, we have to defend ourselves,” he said.

Many more have died – the estimates vary from thousands to more than 20,000 – in incidents that police say could be drug-related, but were not part of their operations.

Dela Rosa is included in a crimes against humanity complaint lodged by a Filipino lawyer with the ICC, a court of last resort. In February 2018, it announced it had started a preliminary examination into the war on drugs.

Accusing the ICC of bias, Duterte a month later cancelled the Philippines’ ICC membership, a move legal experts say makes no difference as its jurisdiction covers crimes committed during a country’s membership period.

Duterte promised when elected in 2016 to eliminate crime and drugs. He and dela Rosa publicly admit they failed, but blame that on the scale of the methamphetamine problem rather than what critics say is a flawed campaign designed to shock by targeting users in slums, instead of the big suppliers.

In a blog post on Friday, Carlos Conde, Philippines researcher for Human Rights Watch, said dela Rosa “may still have a date with justice”.

“Now that dela Rosa is a policymaker, there is renewed urgency in bringing all those responsible for ‘drug war’ crimes to justice,” he said.