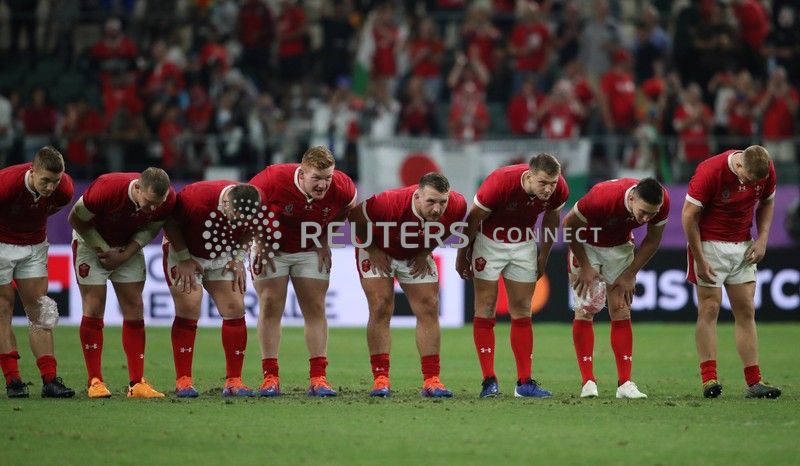 OITA, Japan (Reuters) – Winger Josh Adams grabbed a hat-trick of tries as a battered and bruised Wales battled to a 29-17 bonus-point win over Fiji on Wednesday to book their place in the Rugby World Cup quarter-finals.

In a frenzied clash under the roof at Oita Stadium, the Fijians gave the Six Nations champions a real scare, surging into 17-14 lead early in the second half of the Pool D with a penalty try.

That revived memories of the ‘Nightmare in Nantes’ when the Pacific islanders knocked Wales out of the 2007 World Cup.

Adams, however, steadied the ship with his hat-trick try on the hour-mark and fullback Liam Williams crossed 12 minutes from the siren to settle the game.

Wales ended the game with concerns over talismanic flyhalf Dan Biggar, sidelined with a head injury for a second time in the tournament and who was quickly ruled out of the team’s final pool game.

“We probably started a little slowly out of the box, we knew that if Fiji got their tails up we were going to be in for a hard day at the office,” said Wales captain Alun Wyn Jones.

“But credit to Fiji, we saw the best of them at times today. We did the job today but plenty to work on.”

The result ensured Wales, with 14 points, leapfrogged Australia (11 points) to top the pool ahead of their final game against Uruguay. Fiji were eliminated after losing earlier matches to Australia and Uruguay.

“I’m so proud of the effort our boys put in this evening,” Fiji coach John McKee told reporters.

“They’re playing a Six Nations champion team that’s been number one in the world this year and they really took the game to them. Although we didn’t get here in the end, it was an absolute gallant effort all round.”

Wales, with England or France awaiting them in the quarter-finals, are also monitoring Adams and key centre Jonathan Davies after they also suffered injuries.

Wales, rejuvenated after a 10-day break, were looking for a fast start but instead it was Fiji charging out of the blocks, spreading the ball wide from an attacking scrum to winger Josua Tuisova, who bashed through Adams and Biggar to score in the right corner.

Wales responded immediately only for backrower Josh Navidi’s score after a turnover to be ruled out by the TMO due to a knock-on. Fiji, too, thought they had scored moments later but scrumhalf Frank Lomani’s effort was also scratched by the TMO.

The early drama continued when Wales hooker Ken Owens was yellow-carded in the eighth minute for a flip-tackle on number eight Viliame Mata and barnstorming Semi Radradra, the player of the match, made Wales pay at once, setting up a try for fullback Kini Murimurivalu in the right corner to make it 10-0.

Fiji’s numerical advantage did not last long as lock Tevita Cavubati was also yellow-carded for a shoulder charge in the 17th minute and now Biggar responded with a sumptuous cross-kick to Adams.

Fiji’s scrambling defence was soon on the brink of collapse as Wales upped the tempo and flanker Semi Kunatani earned the third yellow card of the first half after a string of Fijian offsides.

Soon after, Adams strolled over for his second five-pointer as the Welsh sliced open Fiji’s threadbare right flank.

Fiji were fortunate to trail by just 14-10 at the break but blew a chance to retake the lead in the 49th minute with another forward pass disallowing a try for Radradra.

The game threatened to turn on its head minutes later as James Davies was yellow-carded for a ruck infringement. Fiji kicked for the corner, rumbled a lineout drive to the line and were awarded a penalty try after Wales collapsed the maul.

Liam Williams then clattered into Biggar as both attempted to catch a clearing kick. After several minutes of medical attention, Biggar groggily got to his feet and jogged off.

Soon after, however, Adams had his hat-trick, again at the corner, before scrumhalf Gareth Davies cantered through a hole to set up Williams for the sealing try.