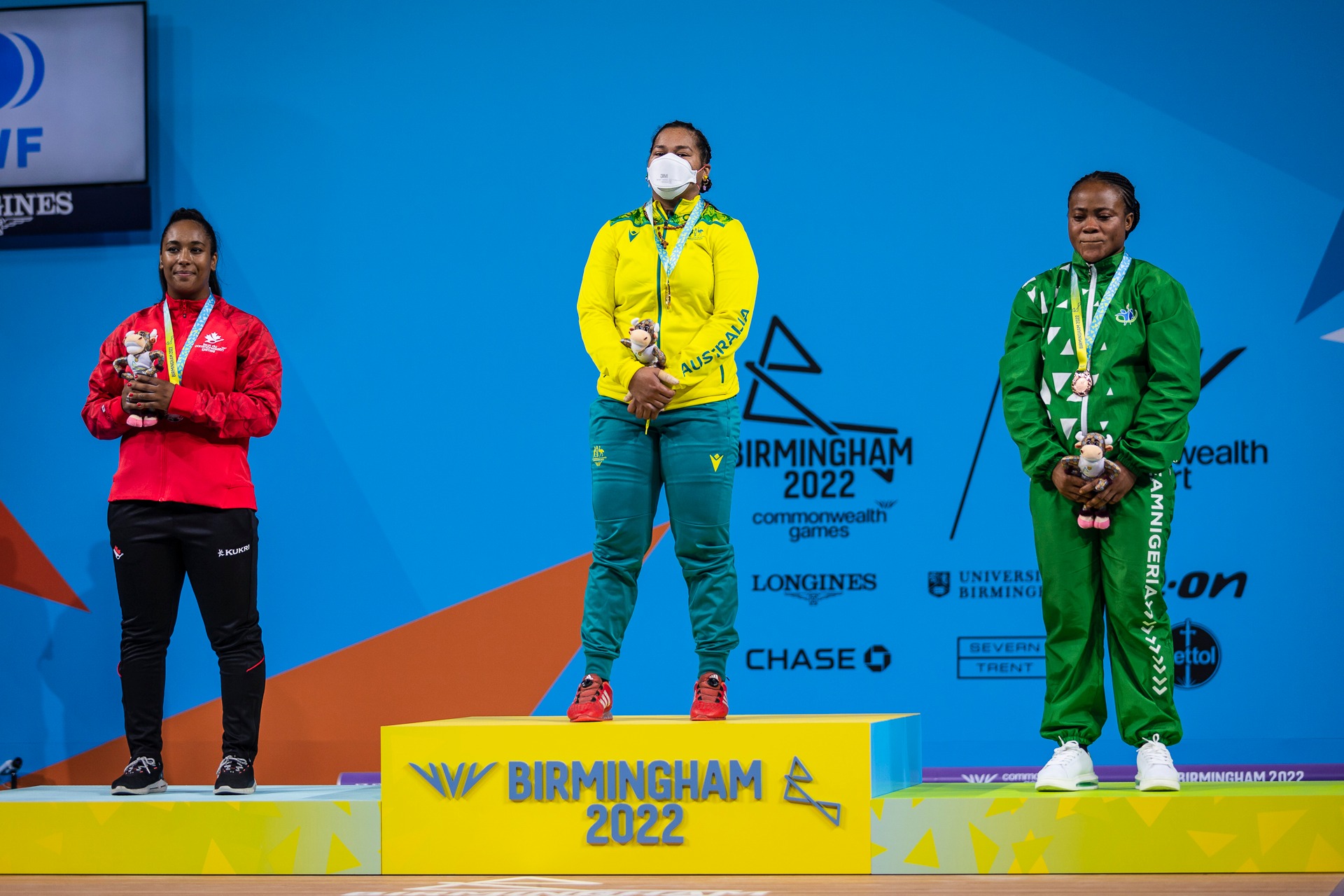 This has to be the moment in sport to date!

How brilliant was Ovalau lass, Eileen Cikamatana on the National Exhibition Centre platform in Marston Green in Birmingham earlier this week?

The only thing sour about the biggest moment in sport where a Fijian has been involved was that she wore the Aussie green and gold and not the banner blue of Fiji.

I am super proud of Eileen’s awesome performance and who wouldn’t be in the country, especially after suffering heartache on Monday morning when our women’s and men’s sevens side’s golden hopes were crushed by Australia and South Africa.

Eileen was at the top of her game and her rise was astounding in a sport that is very tough.

Her weightlifting journey started at 15 years of age when she went to train in New Caledonia under the Paul Coffa regime.

Just under two years later, in 2016, she was introduced to the world stage and finished with a bronze medal at the World Youth Champs in Malaysia.

She competed in the 69kg division.

In a year she put on about 20kgs to appear in the 90kg class at the World Junior Champs in Tokyo where she scooped a silver medal.

Plus one more year and she was on the top of her game in the 2018 Commonwealth Games where she took gold for Fiji in the 90kg with a class lifting show.

She dropped to the 81kg division over 2019 and 2020 before getting to 87kg for the Commonwealth Games in Birmingham.

She was Fiji’s brightest shining sportswoman in 2017 and won the accolades and she should have got that again in 2018 for that gold in Gold Coast, but politics in the sport reared its ugly head.

I spoke to some sports officials in weightlifting and its surroundings at the centre of the hullabaloo only after it was revealed that Eileen was not going to represent Fiji.

Fiji weightlifting went on to say they were supporting her despite reports surfacing that the lifter was asked to return to train at home and not at her Noumea, New Caledonia base.

At the time also, Fiji had just appointed a new ex-pat coach.

Among all of that, most that I spoke to believed that the sport is bigger than any individual and Eileen should work with the authorities and resolve the issues.

What many failed to understand was that Eileen was a class act.

At 19 years of age, she smashed the Commonwealth competition in the tough 90kg class to win gold for Fiji.

You have to give her credit for that performance and know that she was made for bigger things in the sport.

While everyone in Fiji from the highest sports office to the doldrums of weightlifting couldn’t get their act sorted – the end result was simple – our toughest woman in sport switched her allegiance to Australia.

Kudos to Australian sport for welcoming her with open arms and providing her with all the support and technical expertise and probably a bright future after sport.

I know her CV would have looked good with a medal from the Tokyo Olympics, but she was unable to represent Australia at that time and couldn’t make that trip.

Now if she did and if her 255kgs total in Birmingham can be used as a yardstick, Eileen would have finished in 4th place.

In 2019 in Peru at the Grand Prix, she got 266kgs and that shows that she can get there because that would have been a silver medal in Tokyo last year.

But who knows with the pressure and atmosphere and with a little push – I am confident she’ll end up on the medal podium in Paris.

One thing I liked about her was her post-gold victory interview.

She said: “I don’t know how to describe it … I can’t fit it into words. I think it’s floating somewhere. I will need to grab it then I will let you know.”

That is superb – just raw feeling after becoming the only woman to win gold medals for two different countries at the Commonwealth Games.

Would Team Fiji have loved to see that gold beside their name on the tally – that would have been sweet.

Eileen has proved many people wrong.

She persevered and she delivered the goods.

She believed in herself and she worked hard to achieve it.

She stood by in what she believed was going to be good for her while many might say that she turned her back on her country of birth – she was chasing a dream and she has got that in Birmingham.

I’d say job half done in the journey as I look forward to Fiji’s strongest woman representing Australia in Paris Olympics 2024.

Eileen is a legend already in world sport, for us, the best we can savor is that she is referred to as a Fijian, never mind that green and gold clad shirt.

I was thinking of scripting something about our silver medals from the sevens teams, but I changed my mind because I guess a lot of people were content with that performance and arguably the two best teams in the competition took the gold medals.

For our teams, it is back to training and the World Cup dance next month.

Now, how good were the Nadi 15s rugby side that swept to victory in the Skipper Cup championship?

Nadi finished at the top of the table after two rounds of roundrobin games and put on heartstopping displays in the semi-finals to oust defending champion Suva and then scored a try in the final minute to defeat Naitasiri.

It’s ages between drinks for the Ilai Derenalagi-coached Nadi as they last won the national rugby title in 2008.

Nadi showed that mental preparation played a big part during the season and for this side they’d be boasting for seasons to come that they defeated powerhouses Suva and Naitasiri in three games in 2022.

A lot of people cast doubts on the Nadi side with two inform players, flankers Jolame Luvevou and my player of the season Ilisoni Galala ruled out as they flew out to seal overseas club contracts, but the Turuva Lumelume-captained team turned up to play finals footy and they stuck their heads in there and produced some great rugby in this titanic battle to lift the silverware.

I was privileged to be at some games in 12 of the 14 rounds of the normal season and at both semi-finals and the big final and jotted notes on players right throughout the season to come to a starting 15 for the 2022 Skipper Cup.

What a great rugby season we have had and I am sure everyone is looking forward to the 2023 Skipper Cup with new teams Yasawa and Macuata.

Enjoy the Rugby Championship with a massive clash between South Africa and a wounded New Zealand to set the rugby world alight early tomorrow.

• SATISH NARAIN is a sports commentator with FBC. The views expressed are the author’s and do not reflect the views of this newspaper or his employer.