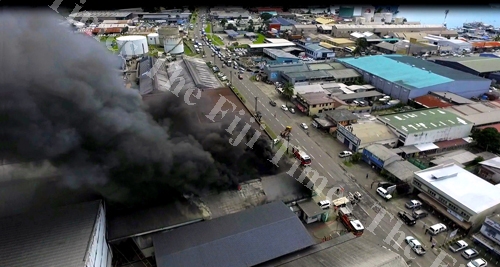 Thick smoke from a fire at the Paradise Beverages factory hovers over Walu Bay in Suva yesterday. Picture: Supplied

A TEAM of firefighters from the National Fire Authority (NFA) managed to contain a fire at the Paradise Beverages (Fiji) office in Walu Bay, Suva yesterday.

Four fire trucks with more than 10 firefighters worked tirelessly at the scene for three hours to stop the fire from spreading to other buildings.

Paradise Beverages (Fiji) general manager Mike Spencer said the circumstances surrounding the cause of the fire was unclear.

Mr Spencer said the fire would not affect the daily operations of the company because the room that was engulfed in flames only contained papers.

“It was a storeroom and its full of papers.

It is not near to where we do our daily operations or warehouse,” Mr Spencer said.

Mr Spencer said a damage assessment would be done afterwards.

He also confirmed more than 100 staff were safe.

Meanwhile, a team of police officers were also present at the scene.

The officers assisted in redirecting traffic from the Walu Bay and Reservoir Rd roundabouts.

Investigation into the cause of fire continues.