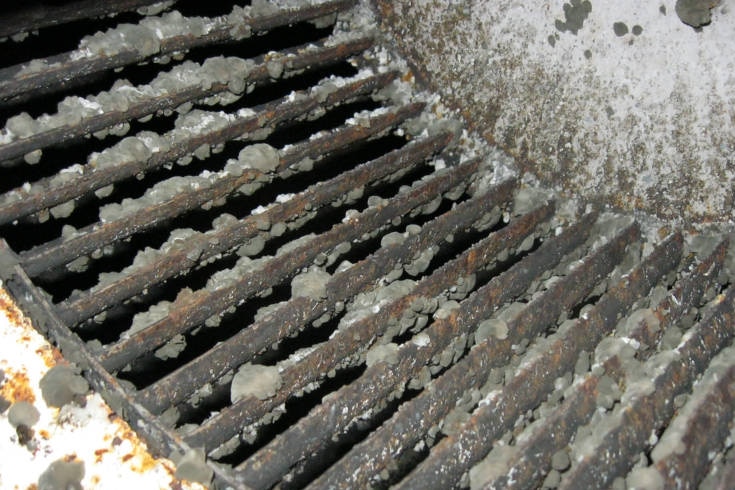 Mould growing on a ventilation fan in a hospital. Picture: ABC

Jeremy Stamkos was just 17 when he began decontaminating hospital air-conditioning systems that were riddled with deadly fungal moulds.

“Unfortunately, we often got the call after people had died,” says Mr Stamkos, now an indoor air consultant.

One incident he can’t forget is the death of a young child in an oncology ward who had inhaled the mould Aspergillus fumigatus, which had been growing in a neglected air-conditioning unit.

“The mould gets into the blood, up into the brain, takes over the lungs — it’s horrific.”

The tragedy hit a nerve for Mr Stamkos.

“I had three young children at that stage myself, and one of my children was exactly the age of that child that passed away.”

These days Mr Stamkos works closely with the Australian Institute of Refrigeration, Air conditioning and Heating (AIRAH) to advocate for clean indoor air.

“The whole matter of indoor air quality is really coming to the forefront,” Mr Stamkos says.

“Nobody knows what is acceptable indoor air quality.”

The COVID-19 pandemic has highlighted the fact there are still major ventilation problems in hospitals. And despite experiences with the airborne spread of coronavirus in quarantine hotels — and some attention being given to schools recently — indoor air quality is still largely unregulated. The health problems associated with poor indoor air has been estimated to cost Australia $12 billion a year. Beyond moulds and viruses, indoor air pollutants include things like toxic chemicals given out by furnishings and building materials, and CO2 breathed out by humans. As well as being a sign of bad ventilation, high CO2 levels can also give people headaches, affect concentration, cognitive abilities and productivity.

Outdoor air quality is monitored, so why not indoor?

Queensland University of Technology indoor air quality expert Lidia Morawska describes indoor air quality as a “regulatory no-man’s-land”. “Ultimately it’s the responsibility of venues to improve ventilation, but since there are no regulations … no-one feels obliged to do anything.” She argues governments need to be monitoring indoor air and enforcing standards to reduce the health cost of poor indoor air quality, something that already occurs with outdoor air quality. “In what sense is indoor air different from outdoor air? We spend 90 per cent of our time indoors.” The problem is there are no nationally agreed standards for indoor air quality. Mr Stamkos has been working to develop national standards for indoor air quality since 2017. “People need to know what the benchmark is for indoor air quality,” he says. He is hopeful that by 2024, there will be an enforceable standard. “Then if there is a complaint, a health official could come in there and do the test and say if it is non-compliant with the standard. At the moment there’s no such thing.” The complexity of the issue means a number of portfolios involved at the federal, state and local government levels need to be involved. Less than 20 countries — several European and Asian countries — have national indoor air quality standards and most are not enforceable, Professor Morawska says. One of the challenges to improving air quality is the trade-off between ventilation and saving energy, Mr Stamkos says. “When you bring in outside air to dilute the pollutants — CO2 and other things — it costs a lot of money to heat or cool that air.” So the desire to save on energy costs has often compromised indoor air quality, especially in tightly sealed buildings. Shifting to better indoor air will involve making changes to a lot of existing buildings. “There’s a huge amount of retrofitting to be done,” Mr Stamkos says. “Every litre of fresh air costs about 35 watts to heat or cool and it’s just a lot of energy,” says Robert Lord from Seed Engineering, who specialises in sustainable
building services. “There is a whole range of buildings out there that have really unhealthy ventilation characteristics.” Architect Geoff Hanmer of OzSAGE, an expert group campaigning for better ventilation standards, likens it to the changes that happened when cities had to stop the spread of cholera in the past. “Just as we spent a huge amount of money in the 19th century to sewer towns, we’re going to have to spend a lot of money to make sure our buildings have clean, safe, fresh air in them.” So what do we all do in the meantime?

Mr Hanmer says public venues that are doing the right thing when it comes to ventilation should display the fact. “If I ran a restaurant, I’d buy one of these big digit CO2 monitors and stick it on the wall so people could see it, because then they’d know I was taking it seriously and they could also see the level was OK,” Mr Hanmer says. “When you go into a movie theatre in Japan, the CO2 reading in the theatre is projected onto the screen.” Mr Lord agrees people have the right to know about the quality of air in public spaces, especially when they’re paying to use them. “I think if you’re renting a hall or a ballroom for a choir, taekwondo practice, or for your daughter’s 21st, you should be able to see a sensor to know the amount of fresh air is being controlled and monitored.” Meanwhile, experts agree the public can “empower” themselves by using low-cost electronic CO2 monitors to avoid poorly ventilated buildings. Mr Stamkos imagines businesses and residents will start using them to push for change. “I think there’s going to be a huge demand that building owners provide acceptable indoor air quality.”

Technology ‘needs to be used intelligently’

People are also increasingly using portable air cleaners, but while HEPA filters can be useful, Mr Stamkos warns they can become a “petridish” of mould if not maintained properly. Other experts suggest avoiding devices using unproven technology. When it comes to saving on the energy costs of ventilation, some buildings use a system called “demand control ventilation”, which automatically adjusts the amount of outdoor air brought in according to how much CO2 is building up. This means that places that have crowds coming and going — think cinemas — can save on ventilation costs when the place is empty. Mr Stamkos says this technology is useful but needs to be used intelligently. If, for example, it’s really humid outside and you bring in a lot of air, this could overload the air conditioner and cause mould to build up — and this can have consequences he is all too aware of. “To save energy, you need to build it tight and ventilate it right.” Other interventions, like upgrading air filters or changing the direction of air fl ow so people are less likely to breathe in airborne contaminants, are also important. Whatever the technology and whatever the costs, Prof Morwaska insists it will be worth it in the end. “The whole society is paying for the health problems caused by poor indoor air,” she says.