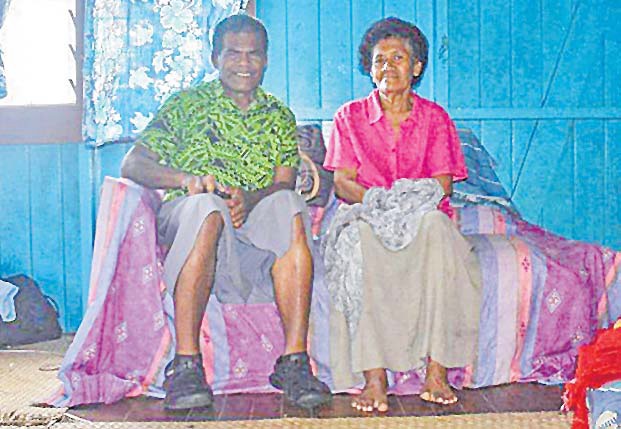 In the mid ’70s, Esekaia Daugunu composed a song when his then girlfriend Adi Salote Savu broke up with him over a relatively small misunderstanding.

He wrote the lyrics on a piece of paper and sent it via mail to her, saying it was his poem to her.

When the song Ena yabaki 1974, ko a biu vuli mai kina became a huge hit across the country, Adi Salote forgave him and took him back.

Forty-six years later, the couple remain married and have been blessed with children and grandchildren.

Speaking to this newspaper, Daugunu, now the Saqani Village chief (Buli Saqani), said in those days when there were no roads from Labasa to Saqani, everyone relied on a Fijian man of Indian descent who delivered mails from village to village.

Daugunu said the man used to collect mails from Udu Point, Tawake District, Saqani District, Vaturova District and did the same on his return to Udu.

He said apart from collecting mails from other parts of the country, the man also provided the only mail service from one village to another.

Daugunu said along with letters of importance, the man was the only carrier of “love letters” for youths living along that route.

Daugunu, at the time, was a police officer and one of his most vivid memories of Saqani was when the music group Vaga Drokadroka ni Saqani was formed by his elder brothers.

“In 1974, I decided to go back to the village during a break and when I saw the group serenading during a grog session, it inspired me a lot, so I decided to stay back for a while because I had a keen interest in music,” the 69-year-old shared.

“God certainly works in mysterious ways because when I was in the police force, we used to serenade as well but our music was not like the Vaga Drokadroka ni Saqani, they sang beautifully together and they were very lively.”

In the mid ’70s a boat trip from Saqani to Labasa used to take one whole day because the boats had 15 horsepower engines only.

The long boat ride provided the perfect opportunity for Daugunu to compose his debut tune.

“As the boat went past Tawake, Lakeba, the view of the place was very beautiful and that was where I composed my first song Wasawasa e maravu au sokota, e vaka ga au sokota na waidroka.”

Daugunu said another memorable track was borne out of a rather unfortunate set of circumstances.

He said Vaga Drokadroka ni Saqani became very popular with all the young girls in Vaturova, Natewa and Tawake districts and many made it very obvious that they wanted to “befriend” them.

He said the only way for them to make contact was through the mailman.

Daugunu said exchanges of “love letters” went into overdrive between the group and women from the three districts. One time the Vaga Drokadroka ni Saqani was invited to go to Tailevu.

Then Komai Nausori, Ratu Filimoni Tagicakibau, had invited them and paid for all their airfares and accommodation.

“News spread in Saqani that we were going to Tailevu and some girls told my girlfriend in Tawake that I would meet a new girl in Tailevu.

“She took it very seriously and when we returned to Saqani, I received a letter from the mailman. “In it she said she was very angry and didn’t want me as her boyfriend any more.

“I was really in love with her and it really hit me hard when she said that.”

That letter inspired his song Ena yabaki 1974, ko a biu vuli mai kina. Daugunu said he wrote the lyrics on a piece of paper, put it in an envelope and gave it to the mailman who delivered it to his sweetheart in Tawake Village.

“At the bottom left, I wrote ‘this is your poem’.”

Daugunu said they practised the song and sang it at all the villages they were invited to perform in.

“Everybody liked the song but they didn’t know who or what the song was about.”

Daugunu was later told that on the day his then ex-girlfriend first heard the song, she went home, took out the letter he had written and knew straight away that the song was actually about their breakup.

He said the following week, he received a letter from her.

“She said she was sorry and if we could continue with our relationship.

“I was so happy when I received her letter that I wrote another song titled Kida ni mataka rui vakaloloma.

“Which means the rising of the sun is so beautiful when my girlfriend is back in my life.

“From then on we resumed our friendship and later decided to tie the knot.

“Since then we have been living happily until today.”