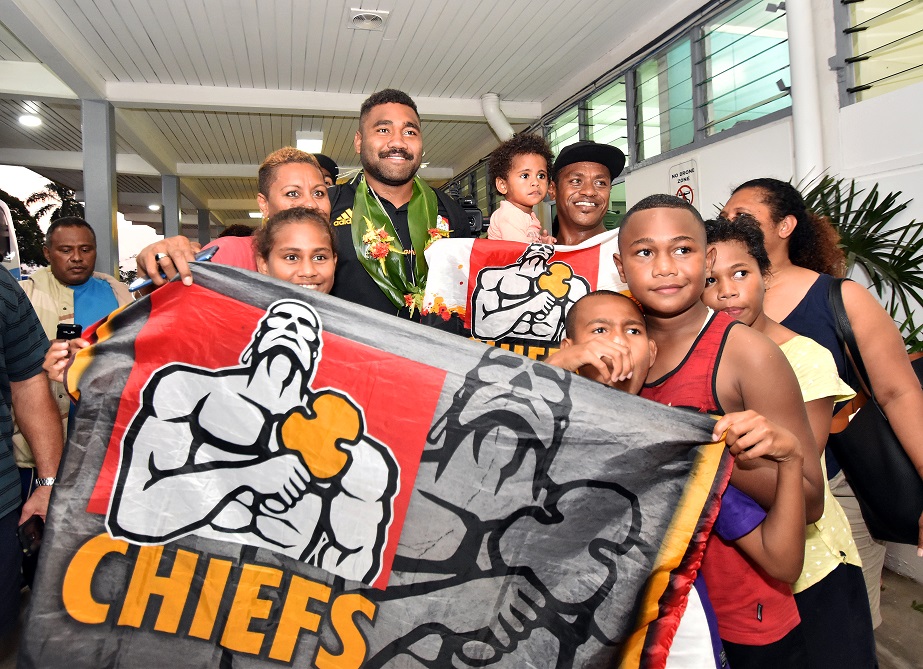 Pita Gus Nacagilevu Sowakula has been a standout player for the Chiefs this season. He is no doubt an integral part of the team.

Starting out his career in the Land of the Long White Cloud was certainly not easy and Sowakula shared how he struggled throughout the journey.

“I started my rugby in New Zealand in 2016 playing for Sportswood United and worked my way up to the Taranaki Development squad before becoming a part of the Taranaki Bulls side in the National Provincial Championship in 2017,” he said.

His performances for the Bulls caught the attention of Chiefs selectors who were quick in signing him to the franchise after the NPC season as an injury cover. He debuted against the Highlanders on March 30, 2018, replacing Chiefs veteran and former All Black Liam Messam in the 66th minute. The rest, now, is history.

“I found it difficult speaking in English all the time as opposed to the islands where we speak in the local dialect and I was really challenged with the weather.

“I found it hard to adjust at first because I arrived in New Zealand when the weather was very chilly.”

The man from Bucalevu on Vanua Levu with maternal links to Namatalevu in Yasawa, said playing in a club which produced many renowned Fijians such as former All Blacks Sitiveni Sivivatu and Flying Fijian players Deacon Manu and Asaeli Tikoirotuma, was “a massive honour.”

“When I started with the Chiefs, I was the only Fijian and I am lucky to be playing alongside Emoni (Narawa) now.

“We know they had left a legacy and we are trying to etch our names into the history books and make our families proud.”

With a year left in his contract with the Hamilton-based Super Rugby franchise, Sowakula has set his sights on fulfilling a childhood dream.

“I know every kid coming to New Zealand from Fiji aims to wear the All Blacks jersey. It is something that I have always wanted to achieve and it would be a huge honour for me if I am named. But if I do not make it, then I will gladly represent my homeland.”

Becoming a first-time dad changed his focus. Sowakula said his daughter was “a blessing” and she was what kept him motivated.

“She is the reason I always ensure I play to the best of my ability. I have a loving partner who supports me in everything I do. I want my daughter to grow up and know that her father was a good rugby player, not only in New Zealand, but in Fiji as well.”

Sowakula knows support will be divided in the lead-up to the historic clash and hopes that there will be a few Chiefs supporters in the stands on Saturday.

“I was brought up by an uncle and aunt at Tagaqe Village, Nadroga, and I know that they will come in Chiefs outfits.

“In 2019, the village came to support me, but I am not too sure about the game on Saturday. I hope that we will be able to spot some Chiefs’ jerseys at the ground.”

Sowakula represented the Fiji basketball team and there are glimpses of his on-the-court prowess in some of his plays, especially when he bamboozled defenders with tricky off-loads. He was part of the Hideaway Hurricanes 7s team from Tagaqe that played alongside Rio Olympics gold-medallist Jasa Veremalua and Drua captain Nemani Nagusa.

He was also part of the Nadroga senior team in 2016 and the Fiji 7s training squad. In his parting remarks, Sowakula emphasised the benefits of being a keen listener.

“I think the biggest advice I can give is to always listen and be attentive.

“I know most parents in Fiji teach their children to always listen and work hard.

“You will have to make sacrifices if you want to achieve something good in life.”