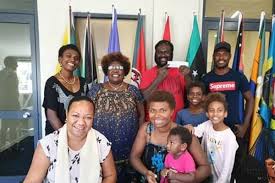 Regular polling finished Tuesday at 6pm, with only the submission of postal votes to continue to Saturday 7 December, 6pm.

Chief Referendum Officer Mauricio Claudio told a press briefing in Buka the referendum had been blessed with well-trained, diligent, thorough and hard-working polling officials who all played their part in the conduct of the historic Bougainville Referendum.

“To the men and women who for the first time took polling to every ward in Bougainville, to every Province of Papua New Guinea with enrolled voters, and across international borders to Australia and Solomon Islands – we thank you.”

“This referendum has been a large and complex operation, delivered in testing conditions of intermittent power and communications, to remote communities, across rough roads and rough seas. We salute the teams for keeping to the polling schedule to ensure every enrolled voter could cast their vote. It’s a credit to you all.”

Assistant Returning Officers are now transporting the checked materials and boxes securely by police escort under the watchful eye of observers, scrutineers and the media.

Chief Referendum Officer said the process was being conducted in an orderly way with each region delivering their materials to the Buka Count Centre by region.

“The conduct of the referendum continues in a peaceful and festive atmosphere, with Central Region delivering their materials today, and South tomorrow.”

“We have already witnessed whole communities accompanying the transport of their ballot boxes, proud of their vote and eager to participate in the process.”

At the Count Centre BRC officials will check all seals and make sure the locks are in place.

“We will not be opening any ballot boxes until after 6pm 7 December, according to the law.”

“I can assure everyone that the next steps will be undertaken according to the same high standard of security and safety undertaken for polling.”