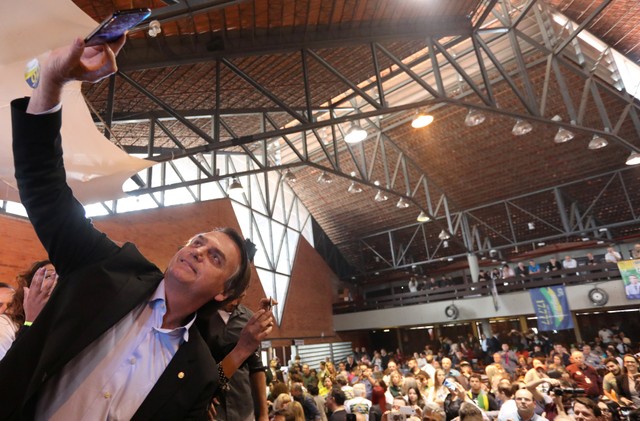 BRASILIA (Reuters) – Support for Brazilian far-right presidential front-runner Jair Bolsonaro edged up ahead of next month’s election, a poll showed on Tuesday, but Workers Party (PT) candidate Fernando Haddad moved into second place, with the two running neck and neck in a likely runoff.

The survey by polling firm Ibope showed Bolsonaro, a former army captain who has tapped into Brazilian anger with rising crime and corruption, had 28 percent support, an increase of 2 percentage points from his figures last week.

He was stabbed in a Sept. 6 assassination attempt that nearly ended his life and will prevent him from campaigning again before the Oct. 7 first-round vote.

Haddad registered 19 percent of voter intentions for the first round, a jump of 11 points from the previous Ibope survey, which was conducted before he officially replaced jailed former President Luiz Inacio Lula da Silva on the ticket.

In the likely event of a second-round vote, Bolsonaro and Haddad would be in a dead heat, with both at 40 percent support among voters in a runoff, Ibope said.

The election will go to an Oct. 28 runoff vote if no candidate wins a majority in the first ballot.

The poll showed Bolsonaro had the highest rejection rate, at 42 percent, which could work against him in a runoff. Haddad had a 29 percent rejection rate, indicating his support had room to grow.

Bolsonaro has campaigned as the man who will sweep away political corruption and stop the return of the Workers Party, which many blame for Brazil’s recent economic recession.

Haddad, a former Sao Paulo mayor, has presented himself as a moderate and is hoping to draw the votes of supporters of Lula, who is still Brazil’s most popular politician despite being in jail for corruption and barred from running for office.

The poll interviewed 2,506 people from Sunday to Tuesday. It had a margin of error of 2 percentage points.