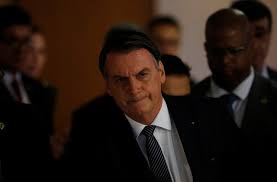 Bolsonaro is due to be honored as the 2019 Person of the Year at the Brazilian-American Chamber of Commerce dinner.

The gala, which already had to move from its original venue at New York’s American Museum of Natural History after the museum decided not to host, is sponsored by various blue-chip firms, which have come under pressure to ditch their support of the event.

Delta said it would no longer be sponsoring the event, but declined to give further details, as did The Financial Times.

“We have decided to withdraw our sponsorship of the … 2019 Person of the Year Awards Gala Dinner,” Bain said. “Encouraging and celebrating diversity is a core Bain principle.”

The Chamber of Commerce did not immediately reply to a request for comment on the boycott. Bolsonaro’s office declined to comment.

The moves are a blow for a president who has actively courted closer ties with the United States and particularly President Donald Trump, whom he has praised. Bolsonaro’s rejection by corporate heavyweights also hurts his vow to grow foreign investment in Brazil.

Bolsonaro is loved by his supporters for his outspoken views on guns, family values and the military. But his critics accuse him of racism, homophobia and misogyny. He once said a female lawmaker was too ugly to rape, and said he would not be able to love a gay son.

Not all sponsors have pulled out.

“Attending the dinner has never involved selecting or endorsing the honoree in any way,” UBS said.

Bank of America Merrill Lynch, BNP Paribas, Credit Suisse, Citigroup Inc and JPMorgan Chase & Co all declined to comment on whether they would abandon the event.

On its website, the Brazilian-American Chamber of Commerce said it had chosen Bolsonaro as its person of the year because of his “intention of fostering closer commercial and diplomatic ties between Brazil and the United States.”