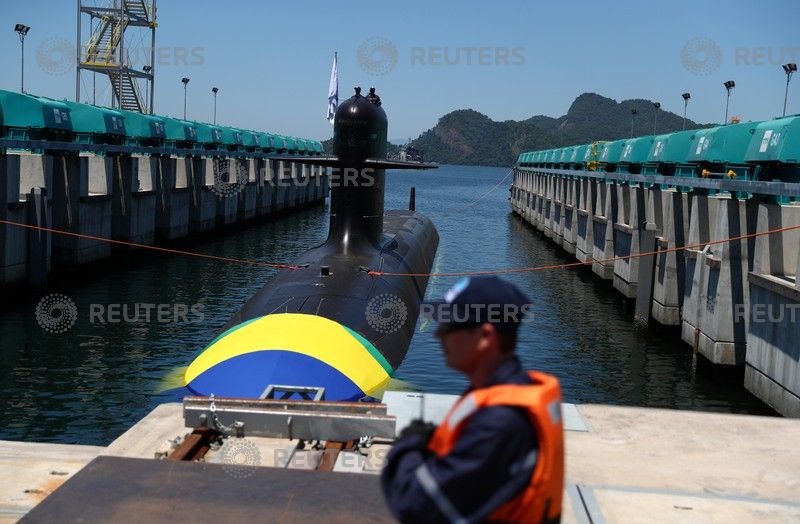 The submarine "Riachuelo", built by the submarine development program (PROSUB), is seen during the inauguration ceremony in Itaguai, Brazil December 14, 2018. REUTERS/Pilar Olivares

ITAGUAI, Brazil (Reuters) – Brazil on Friday launched the first of five attack submarines built with French technology in a 35 billion-real ($8.9 billion) program planned to end in 2029 with delivery of a nuclear-powered submarine.

President Michel Temer and his right-wing successor, President-elect Jair Bolsonaro, both pressed the button that lowered into the sea the 1,700-ton submarine named Riachuelo at a Rio de Janeiro naval base. Temer’s wife, Marcela, had christened the vessel, by smashing a champagne bottle against its hull.

The submarines being built by the Brazilian Navy in partnership with France’s defense company Naval Group, formerly known as DCNS, are a modified version of the Scorpene class diesel-powered submarine.

While the first four submarines in the deal with Naval Group are conventional subs, the fifth will place Brazil in the club of only six nations with nuclear-powered submarines – the United States, Russia, France, the United Kingdom, China and India.

The program has been delayed by budget cuts and corruption scandals involving contractors such as Brazil’s largest engineering and construction firm Odebrecht. The launch date of the last submarines has been put back until 2029.

The launch of the Riachuelo gives the Brazilian Navy six submarines, adding to five older ones of German technology.

Admiral Bento Albuquerque, who will be mining and energy minister in Bolsonaro’s cabinet when he takes office Jan. 1, said investment in the new sub program would total 35 billion reais at today’s prices.

The new submarines are planned to equip the Navy to patrol Brazil’s 3.5 million square-kilometer off-shore deep waters that contain vast wealth in oil and gas reserves of the so-called pre-salt region.

“Brazil has a vocation for peace and is building its submarine not to threaten anyone or unsettle the calm of international waters,” Temer said.

“Brazil is building submarines because a nation with more than 7,000 kilometers of coastline cannot do without tools to defend its sovereignty and it marine riches,” he said.