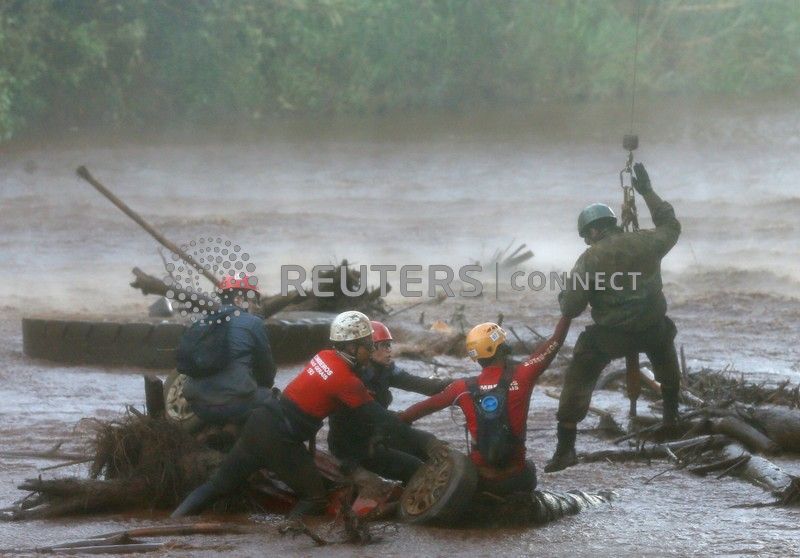 FILE PHOTO: A soldier helps a member of a rescue team on Paraopeba River as they search for victims of a collapsed tailings dam owned by Brazilian mining company Vale SA, in Brumadinho, Brazil February 5, 2019. REUTERS/Adriano Machado/File Photo

RIO DE JANEIRO (Reuters) – Brazilian federal police proposed criminal charges against Vale SA, auditor TÜV SÜD and 13 of their employees, alleging fraud in relation to a deadly dam collapse in January, according to a document seen by Reuters on Friday.

Federal police accused the companies of working with falsified documents attesting to the stability of the dam in Brumadinho, in the southeastern state of Minas Gerais, a source with knowledge of the matter said.

The dam killed nearly 250 people when it collapsed, unleashing a torrent of mining waste on a nearby town and roiling global iron ore markets.

Vale said in a Friday securities filing that it was aware of the police investigation, but would not comment further until it has more details. TÜV SÜD declined to comment.

Vale shares edged up 0.5% on Friday, trading roughly in line with Brazil’s benchmark Bovespa stock index. The stock is down nearly 14% since the accident, which has disrupted output the company scrambled to verify the safety of its dams.

It was not clear how many of the individuals accused by Brazilian police were still working for Vale and TÜV SÜD.