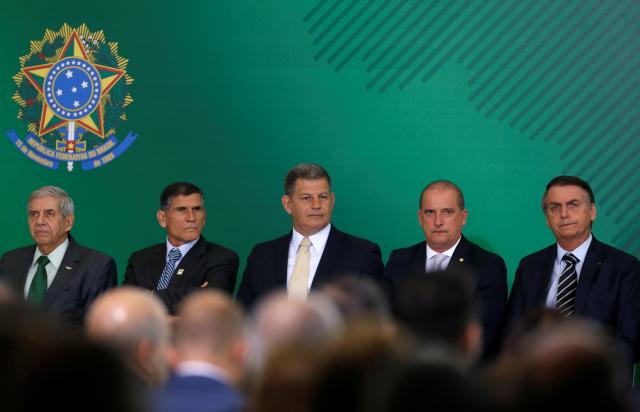 BRASILIA (Reuters) – President Jair Bolsonaro’s far-right government launched a barrage of measures on its first day in office on Wednesday to crack down on crime and shrink the size of the state, sending Brazilian markets higher.

Former army captain Bolsonaro, whose election in October marked a sharp swing away from three decades of center-left governments in Brazil, took office on Tuesday saying he would free Latin America’s largest nation from “socialism and political correctness.”

Taking the helm of their ministries on Wednesday, Bolsonaro’s cabinet unveiled sweeping plans to step up privatizations, toughen prison sentencing guidelines and hand control over indigenous land claims to the powerful Agriculture Ministry.

“If we have solid pension reform, we will get 10 years of growth,” said Guedes, who heads a team of orthodox economists already being likened to the ‘Chicago boys’ who radically overhauled Chile’s economy in the 1970s and 1980s.

Guedes said he planned to cut Brazil’s tax burden to 20 percent of gross domestic product from 36 percent, free the credit market from overcrowding by state banks, and reduce protectionism.

Bolsonaro’s government – Brazil’s first far-right administration since a military dictatorship gave way to civilian rule in 1985 – has stirred concerns it could jeopardize human rights with a promised crackdown on crime and destabilize the sensitive Amazon biome through commercial exploitation.

Fulfilling a campaign promise to his staunch supporters in the farm sector, one of Bolsonaro’s first moves in office was to decree that indigenous land claims, a source of bloody clashes on Brazil’s agricultural frontier, would be decided by the Agriculture Ministry.

The gift to the powerful agribusiness sector enraged environmentalists already worried by Bolsonaro’s plans to loosen protections of the Amazon rainforest.

Brazil’s military has long been concerned with national sovereignty over the Amazon and its riches. Foreign non-governmental organizations were alarmed by a decree to monitor their activity, a task assigned to a retired general in the new cabinet.

The new president was elected on a platform to clean up Brazilian politics, and has put Brazil’s top anti-corruption campaigner, Sergio Moro, in charge of a Justice Ministry beefed up to fight graft and battle organized crime.

Moro, a former federal judge who spearheaded the “Car Wash” corruption trials that put former leftist President Luiz Inacio Lula da Silva and other high-profile politicians in jail, said on Wednesday he would help usher in a new era of law-and-order.

“The top mission given to me by the president was clear: end impunity for corruption cases and combat organized crime to reduce violent crimes,” Moro said after being sworn in. He said he plans an ambitious anti-crime bill that would stiffen prison sentences.

An outspoken admirer of U.S. President Donald Trump, Bolsonaro has pledged to strengthen relations with Washington while pursuing a nationalist agenda that downplays multilateral bodies and regional trade blocs.

His inauguration was attended by U.S. Secretary of State Mike Pompeo, who said the United States and Brazil will jointly defend democratic values in the region.

“We have an opportunity to work alongside each other against authoritarian regimes,” Pompeo said on Wednesday after discussing Venezuela with Brazil’s new Foreign Minister Ernesto Araujo, who was picked by Bolsonaro for his admiration of Trump’s conservative nationalism.

Bolsonaro’s rise to power culminates a swing to conservative rule in Latin America that has isolated leftist governments such as Venezuela, Cuba and Nicaragua.

While Bolsonaro surprised Brazil’s political establishment by surging to victory over a leftist coalition led by Lula’s Workers Party, he takes office with the lowest approval rating of any new Brazilian president, according to a Datafolha poll Tuesday.

He has also yet to build a base in Congress, where he has eschewed the political horse-trading that traditionally helped Brazilian presidents govern.

As a result, he may have an uphill battle to enact his agenda, which includes austerity measures to bring down an unsustainable budget deficit of about 180 billion reais ($47.3 billion).

Many investors, however, remain optimistic that Bolsonaro’s economic team will succeed in passing reforms needed to reduce the deficit and restore confidence and growth to a slow-moving economy.

One of Bolsonaro’s first steps was to decree a less-than-expected increase to the minimum wage, to 998 reais ($260) a month from 954 reais.

Doing even better was gun manufacturer Forjas Taurus SA, whose shares rose 47.6 percent on Bolsonaro’s plan to ease gun controls, which he has argued will help Brazilians arm themselves in self defense against crime.