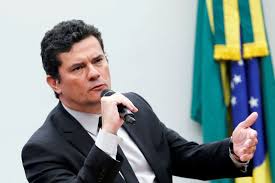 FILE PHOTO: Brazil's Justice Minister Sergio Moro speaks during a session of the Public Security commission at the National Congress in Brasilia, Brazil, May 8, 2019. REUTERS/Adriano Machado

The changes, which must still be ratified by the full lower house of Congress and then the Senate, are seen as a setback to the government – and particularly to Moro, who has declared war on the country’s culture of political graft and impunity.

Moro has met with antagonism from the country’s political elite, many of whom the former federal judge jailed when he led the sweeping five-year political corruption probe, known as Car Wash.

When he became justice minister this year, Moro pushed to transfer the Council for Financial Activities Control (COAF), which flags suspicious funds moving through Brazil’s banking system for review by law enforcement officials, into the Justice Ministry.

On Thursday, however, a special joint committee comprised of lawmakers from the Senate and lower house voted to return the COAF to the Economy Ministry, which Bolsonaro created to replace the Finance Ministry, by a vote of 14 to 11.

Moro had argued that placing the COAF under the umbrella of the Justice Ministry was crucial for fulfilling Bolsonaro’s vow to end years of political graft.

But the move alarmed some lawmakers, many of whom are under investigation on suspicion of corruption. Critics argued that moving the COAF to the Justice Ministry represented a potentially dangerous consolidation of authority under Moro.

Bolsonaro said in an online video on Thursday evening that he hoped Congress would keep COAF in the Justice Ministry, given that it is a powerful tool for combating corruption.

The congressional committee also voted to remove powers the government gave itself to supervise and monitor tens of thousands of non-governmental organizations, including foreign ones that Bolsonaro warned were interfering in Brazil.

The Agriculture Ministry declined to comment, and the Justice Ministry did not reply to a request for comment.