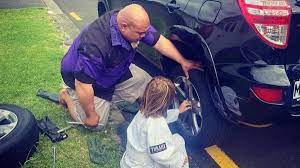 AUCKLAND, 30 MARCH 2021 (NZ HERALD) – An Auckland woman left stranded on the side of the road with a flat tyre didn’t realise the man who pulled over to help change it was none other than Samoan-Kiwi boxing legend David Tua.

Maza White and her young son Jagger were waiting for roadside assistance after getting a flat tyre on a Grey Lynn road on Sunday.

They’d been told it would be a 45-minute wait – but White told the Herald she’d only been waiting for a few minutes when a car passed them before doing a U-turn and pulling up beside them.

A woman – Tua’s wife Helen – rolled down the window and asked if White needed help. She and her husband then got out of their car and he got to work changing the tyre, even taking the time to teach her seven-year-old what to do.

“I was really moved by the human kindness,” White shared. “I didn’t realise who he was until afterwards.”

“I was crying … They were really lovely and interested, asking us questions.”

The filmmaker and makeup artist shared that Tua even showed her little boy, who has learning difficulties, how to change the bolts and replace the tyre.

“They mentioned that they owned a gym, I offered to stop by and bring them a bottle of wine but they refused. They didn’t want anything in return,” she said.

But even after learning their names, it wasn’t until the couple had moved on and White called a girlfriend, who is also Samoan, that she realised who the couple were.

“She said, ‘He’s the most famous boxer to come out of New Zealand!'” White laughed.

“You know, they took the time out of their date day, they were on a date and they stopped to help us.

“I was also really moved that they told me I was their blessing, rather the other way around.”

Tua told Stuff he stopped to help because that was the way he was raised.

It was his monthly date night with his wife, but they agreed they could spare the time to help out White and her young son.

Shortland St star Nicole Whippy later tweeted about it and reshared the sweet photo of Tua and White’s son changing the tyre.

“She is so touched by this man’s kindness she starts crying,” Whippy shared. “She posts this photo of the moment. She had no idea it was David Tua.”