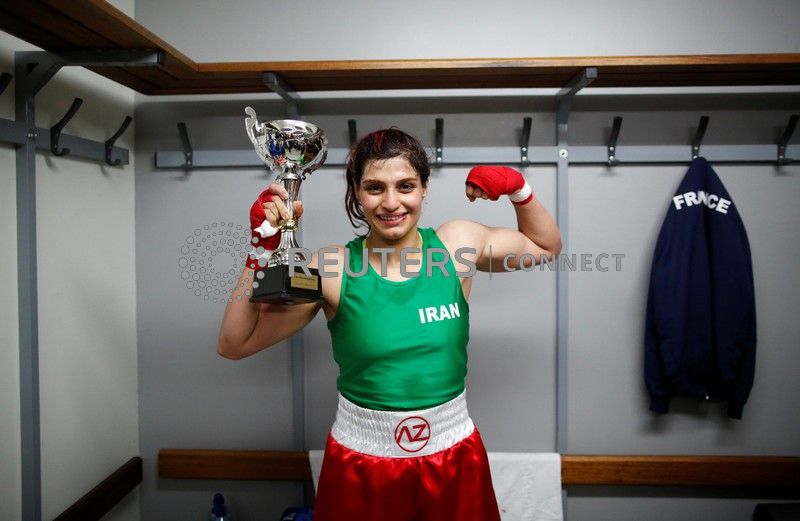 PARIS (Reuters) – The first Iranian woman to contest an official boxing bout has cancelled plans to return home after an arrest warrant was issued for her in Tehran, her representative said on Wednesday as Iranian authorities issued a denial.

Sadaf Khadem beat a French boxer, Anne Chauvin, in the bout, which took place in western France on Saturday.

Her representative told Reuters that authorities had issued arrest warrants against her and fight organiser Mahyar Monshipour.

Monshipour, an Iranian-born former boxing world champion who is now a French citizen, set up the bout after Iran opened the door to allowing women to box.

Hossein Soori, the head of Iran’s boxing federation, denied Khadem would be arrested, attributing the information to “media linked to Saudi Arabia”.

“Mrs Khadem is not a member of (Iran’s) organised athletes for boxing, and from the boxing federation’s perspective all her activities are personal,” he was quoted as saying by the semi-official ISNA news agency.

Iranian women’s participation in sports events is heavily restricted, though authorities are beginning to give ground in some areas after years of campaigning by pressure groups.

The federation now allows women to register to box, on condition that they be coached by a woman and wear the Islamic hijab while competing. To date, no bouts between female fighters have taken place in Iran.

Monshipour was planning to travel back to Iran with Khadem this week.

France’s foreign ministry could not immediately comment on the case and neither could Khadem nor Monshipour.

Franco-Iranian relations are in a tense phase after comments by France’s ambassador to the United States last week on Iran’s nuclear programme sparked an angry reaction from Tehran.