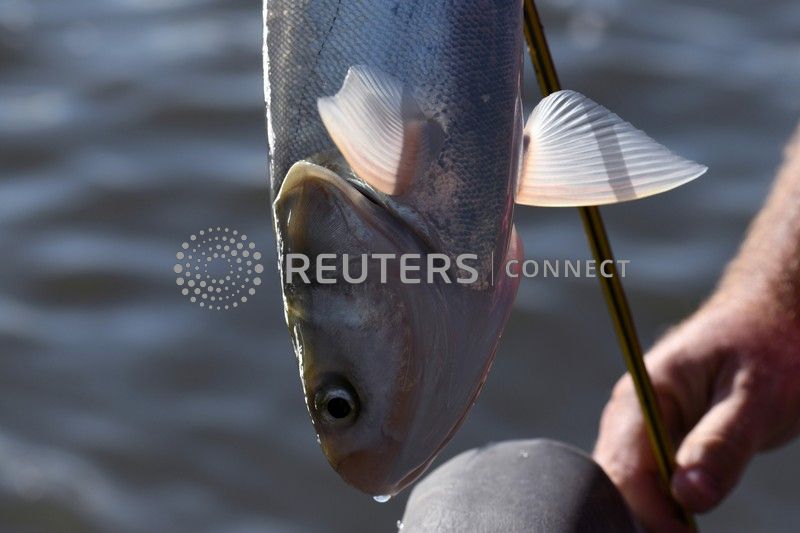 PEORIA, Ill. (Reuters) – A firefighter and archery enthusiast is making some extra cash with a novel if modest contribution to the ecosystem of the Great Lakes – taking paying customers out for boat rides on the Illinois River to hunt invasive Asian carp fish with bows and arrows.

Nathan Wallick, better known as Captain Nate to his Peoria Carp Hunters clientele, is one of several private operators capitalizing on a bowfishing craze that helps to keep the carp – voracious, prolific aquatic pests – out of the largest freshwater lakes in the United States.

As he pilots his specially outfitted boat along the Illinois River about 100 miles (160 km) downstream from Lake Michigan, Wallick’s patrons test their archery skills shooting at carp with harpoon-like arrows as the silvery, muscular fish leap several feet out of the water in the vessel’s wake.

Wallick, 35, a professional firefighter with a love of hunting and angling, distinguishes this brand of “aerial bowfishing” from more traditional methods by which archers ply the river at night with spotlights, hunting for carp swimming beneath the surface.

At the end of a daylong outing last Saturday with six of his regular customers, Wallick’s vessel returned with a barrel of about 100 carp skewered in mid-air and reeled into the boat.

“The name of the game is try and knock them down as much as possible and keep them from getting into the Great Lakes,” Wallick told Reuters in an interview.

Their catch pales in comparison to the numbers taken annually by commercial fishing boats working under contract for the Illinois Department of Natural Resources.

That effort has removed 8.5 million pounds (3.9 million kg)of Asian carp from the upper Illinois River alone since it began in 2010, according to Kevin Irons, the department’s aquatic nuisance program manager.

Although the carp are tasty and considered a delicacy in China, the ones caught in removal operations are supplied to vendors who process them into non-food products such as fish oil, fertilizer and pet treats, Irons said.

The agency welcomes the relatively small added contribution from sport bowfishing, he said.

So far, Lake Michigan and three of the five other Great Lakes – Superior, Huron and Ontario – remain free of Asian carp, Irons said. Just two carp have ever been detected in the Illinois Waterway – a shipping channel linking Lake Michigan to the Illinois River – beyond an electric barrier designed to keep them out. Both were caught.

Four Asian carp species now inhabit much of the Mississippi River watershed that drains a large swath of the United States, while one species, grass carp, has made it into one of the Great Lakes, Lake Erie.

The prodigious Asian carp, which can grow to 100 pounds feeding entirely on plankton, threaten to upset food chains of the waterways they inhabit while crowding out native fish. In the lower Illinois River, for instance, they now account for 70% of the aquatic life, Irons said.

Originating from China, Asian carp were deliberately introduced into the United States in the 1970s to help control plankton blooms in commercial catfish ponds in the South. But through flooding and accidental releases, the carp found their way into the Mississippi and have invaded many of the nation’s rivers and streams since.