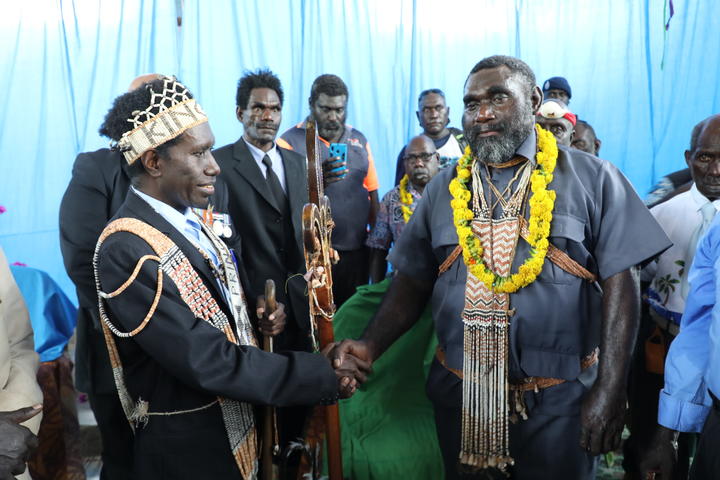 President Ishmael Toroama made a visit to Bougainville’s south where he met with U-Vistract leader Noah Musingku, who presides over the so-called Kingdom of Papaala.

In 1997, Musingku formed U-Vistract, an alternative financial system likened to a pyramid scheme, which even lured in the government of neighbouring Solomon islands at one point.

With many investors having lost money with U-Vistract, and PNG authorities after him, Musingku spent most of the last two decades in hiding, guarded by armed supporters in a remote part of Siwai District.

President Toroama met with Musingku on Friday to witness a reconciliation ceremony between Police Minister Thomas Tari and the U-Vistract faction at Tonu.

It was in Tonua that an assault on Tonu by police in 2006 resulted in several deaths and injuries and caused a rift between the Autonomous Bougainville Government and U-Vistract.

President Toroama’s office describes the reconciliation as a major step in unifying Bougainville and bringing the faction into alignment with the ABG.

A statement from the office said the reconciliation saw “customary obligations fulfilled by both sides to signify the end of hostilities and any ill feeling between the ABG and the U-Vistract faction”.

The ABG is in the early stages of consultations with PNG’s national government over how to proceed with the result of the 2019 independence referendum in Bougainville.

Almost 98 percent of Bougainvilleans voted for independence in the historic referendum, but the result is non-binding and subject to ratification by PNG’s parliament.

President Toroama urged Musingku of the need for unity as his government continues to consult with PNG, saying the national government will “embrace the Bougainville process if the people unite and work together when they put aside their differences to create a prosperous Bougainville”.

A self-styled king, Musingku has never acknowledged the authority of the autonomous government in Buka.

The ABG maintains its stance that it does not recognise the U-Vistract faction as a separate government from Bougainville.

However it does identify it as an important stakeholder in the peace process.