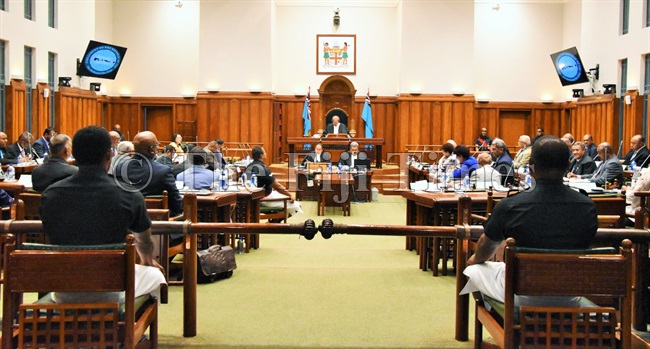 The Fijian Parliament in session. Government intends to borrow $1.17 billion in the 2022-2023 financial year to cover the estimated net deficit of $872.2 million. Picture: FILE

This is stated in the Annual Borrowing Plan report released by the Ministry of Economy on Monday.

“The Fijian Government will continue to pursue a mix of domestic and foreign currency borrowing and ensure that the debt composition is well managed against any exchange rate risks,” states the report.

“The total financing need is estimated at $1179.7 million. Government may increase its overseas borrowing limit simultaneously reducing its domestic limit and vice versa.

“This provides flexibility and ensures that Government can fully utilise all financing sources available whilst remaining within the borrowing limit approved by Parliament.

“The Government through the Ministry of Economy will continue to ensure financing needs are met at minimal costs, subject to prudent levels of risk while maintaining the objective of domestic bond market development.

“Additionally, through foreign borrowings, Government has been supporting foreign reserve levels and liquidity in the banking sector.”

The Ministry of Economy is projecting total government revenue to be $2.9 billion in the 2022-2023 financial year and government expenditure of $3.8 billion, resulting in a net deficit of $872 million.