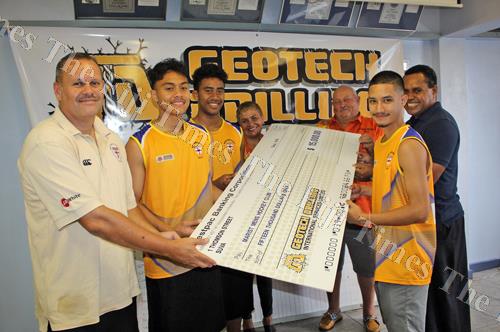 Charlotte Barnett, fourth from left, and husband Gary, third from right, of Geotech Drillings International Services Limited handovers the cheque to the Marist Hockey Club during the cheque presentation at the FASANOC office in Suva on September 26, 2018. Picture: JONACANI LALAKOBAU

FIJI’S biggest hockey tournament is expected to be a nail-biting three-day event for fans and players as Geotech Drilling continues its sponsorship for the annual memorial competition.

The 24th Geotech Drilling Eastgate Memorial Hockey tournament has attracted 16 teams to participate in this year’s event at the National Hockey Centre in Suva this weekend.

Over the years, the Marist Hockey Club has ensured the operation and officiating of the competition.

This year the tournament has been boosted with a $15,000 sponsorship from Geotech Drilling.

The Marist men and women’s hockey teams will be defending the main titles.

Club president Peni Sigabalavu said despite a long drought of trying to win in previous years, they expected a tough encounter this year.

“We did not win the men’s division for the past 20 years until last year. We want to continue winning this year,” Sigabalavu said.

“We have a young side and we believe they are capable of doing the job and win the title again this year.”

The Marist men’s team will be boosted with the presence of the five players who are studying under scholarships in New Zealand.

Marist player Douglas Havea is confident of his side in trying to defend the title this year.

The tournament will start today, and continue tomorrow and Sunday at the National Hockey Centre in Suva.