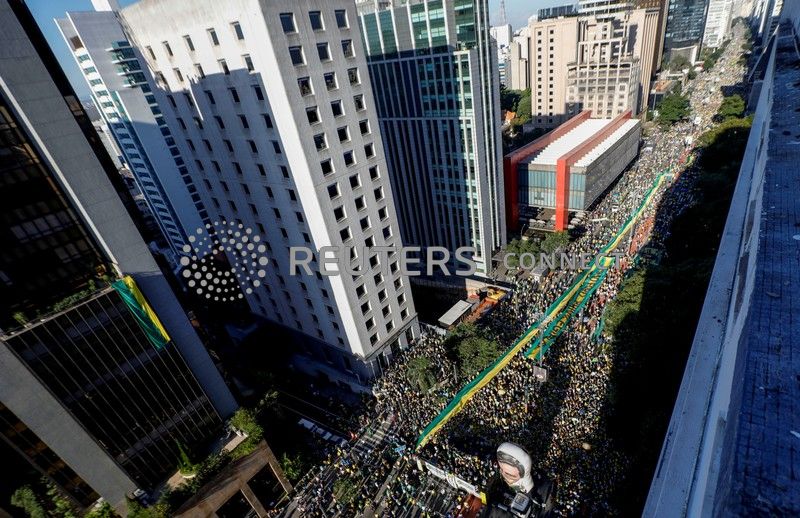 SAO PAULO/RIO DE JANEIRO (Reuters) – Supporters of Brazilian President Jair Bolsonaro marched on Sunday in support of his agenda and against lawmakers whom they see standing in his way, adding to tensions between the far-right leader and Congress.

Although official crowd estimates were scarce, the demonstrations appeared smaller than May 15 protests against Bolsonaro’s planned spending freeze on education, which sent tens of thousands into the streets in around 200 cities, Brazil’s largest protests in Brazil since Bolsonaro took office.

On Sunday, there were pro-government rallies in at least 156 cities, according to news website G1.

Bolsonaro easily won election last year, but since taking office on Jan. 1 his popularity has fallen in several polls. A survey released on Friday showed more Brazilians disapprove of his government than approve, a sharp swing in public opinion but evidently not enough to turn off core supporters.

Those in the streets on Sunday argued that Brazil’s corrupt political system has not allowed Bolsonaro to push through his legislative agenda and make progress in critical areas like security, education and the economy. They say that Bolsonaro is standing by his core pledge to not engage in the traditional political horse trading in Brasilia that is largely blamed for stunning levels of corruption in the nation’s political class.

Bolsonaro initially considered participating in the demonstrations, before deciding against it and recommending the government’s ministers not to join. Rhetoric from some organizers challenging the authority of Congress and the Supreme Court also turned off members of the president’s party and other allies.

Still, Bolsonaro tweeted a half dozen times about the marches on Sunday and in a TV interview called them “the people’s spontaneous manifestation.”

The president said he wanted to work with Congress, but had stern words for the broad centrist bloc of parties known as the “Centrao,” which he said had no good reason to exist.

“Lawmakers need to distance themselves from that. It’s pejorative to be classified as in the middle, negotiating for jobs in the ministries, state firms and banks,” he said.

Bolsonaro suggested that he wanted states to set their own policies for mineral rights, environment controls and even the penal code instead of waiting for legislation from Brasilia.

“Maia needs to wake up and help the country,” Jose Antonio de Souza told Reuters while demonstrating in Copacabana.

The former president has been convicted of accepting bribes. The house speaker has not been charged with such crimes. Maia’s allies have called Bolsonaro anti-democratic for demonizing Brasilia’s political class.

Speaking in a church in Rio on Sunday, Bolsonaro said the demonstrations were a response “to those that insist on keeping old practices and do not allow the people to be free”.

Bolsonaro rode to power last year on campaign promises to end a culture of political corruption, crack down on crime and kick off an economic recovery by overhauling the social security system. The first months of his government have been marked by infighting in the cabinet and strained relations with Congress.

“I have voted years for the left, but I am now worried about the future of the country,” said protester Carley Farias. “I hope the demonstrations influence Congress.”