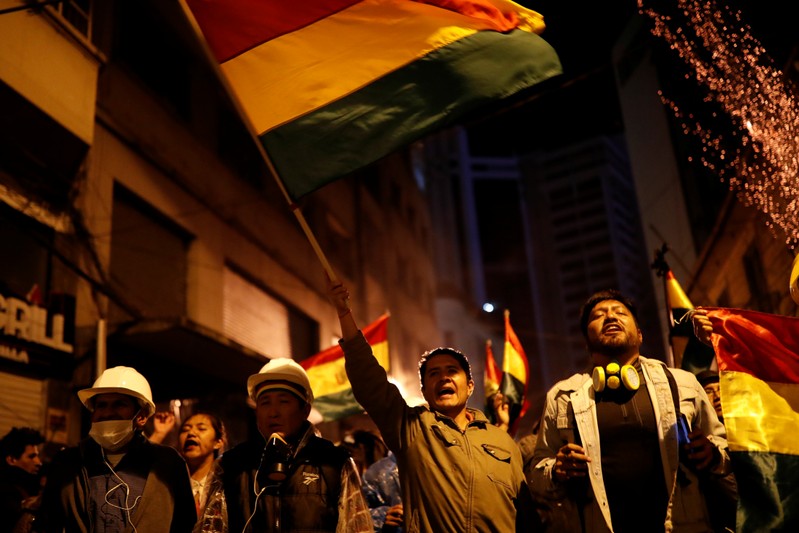 LA PAZ (Reuters) – Bolivia’s government said on Friday that an audit of the country’s contentious presidential election will be completed early next week, which could either back President Evo Morales’ victory or throw open the door to a new vote.

At the presidential offices in La Paz, Foreign Minister Diego Pary said the audit by the Organization of American States (OAS) should be ready by Tuesday or Wednesday. The audit follows allegations of fraud in the Oct. 20 election.

The South American country has been rattled by protests, strikes and road blocks for almost three weeks since voters headed to the polls, hurting the landlocked country’s image and economy.

Morales, Latin America’s longest-standing leader, won the vote with a 10-point lead over rival Carlos Mesa, giving him an outright win, but the vote count was mired in controversy after it was halted for nearly a day.

Mesa, the opposition leader, asked Congress on Friday to pass an emergency bill setting the details of new elections as Morales vowed again not to buckle to mounting pressure to step down.

“The Right says ‘Evo has to resign.’ I want to tell you, sisters and brothers, to all of Bolivia and the world, I will not resign,” Morales, a socialist, said at a public event. “We are elected by the people and we respect the constitution.”

Mesa’s proposal, outlined in a letter to the head of Bolivia’s Congress, called for a new vote before Morales’ current terms is set to end on Jan. 22. To facilitate this, he said, the country needs a newly staffed electoral tribunal.

Street clashes broke out on Thursday among supporters and opponents of Bolivia’s government armed with slingshots and dynamite. Luis Fernando Camacho, a civic leader from the eastern city of Santa Cruz, appeared at rallies in the city, calling for Morales to step down.

Camacho says he has prewritten a resignation letter that he wants Morales to sign, and said he plans to deliver it to the president on Monday.