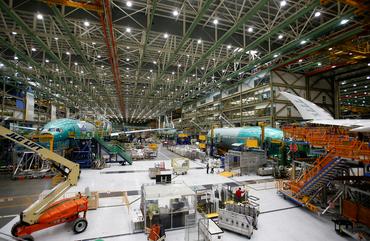 “During final load testing on the 777X static test airplane, the team encountered an issue that required suspension of the test,” Boeing spokesman Paul Bergman said in a statement.

The Seattle Times reported a cargo door exploded outward during a high-pressure stress test on the ground. The newspaper said the accident occurred on a static test airplane, which is built for ground testing only and not intended to fly.

“Overall testing is continuing,” Bergman said. The test occurred on Thursday, he said, declining to provide other details of the incident.

The problem happened during the final test that must be passed as part of the plane’s certification by the Federal Aviation Administration, the newspaper report said.

In final load testing, planes are subjected to loads and stresses that are well beyond normal operational conditions, the spokesman said, adding that the incident is under review.

The company previously reported a delay on its 777X widebody program as General Electric Co (GE.N) engine problems pushed the first flight into 2020.

Chicago-based Boeing has also been unable to deliver any of its 737 MAX aircraft since the single-aisle plane was grounded worldwide in March after two fatal crashes in Indonesia and Ethiopia killed 346 people.