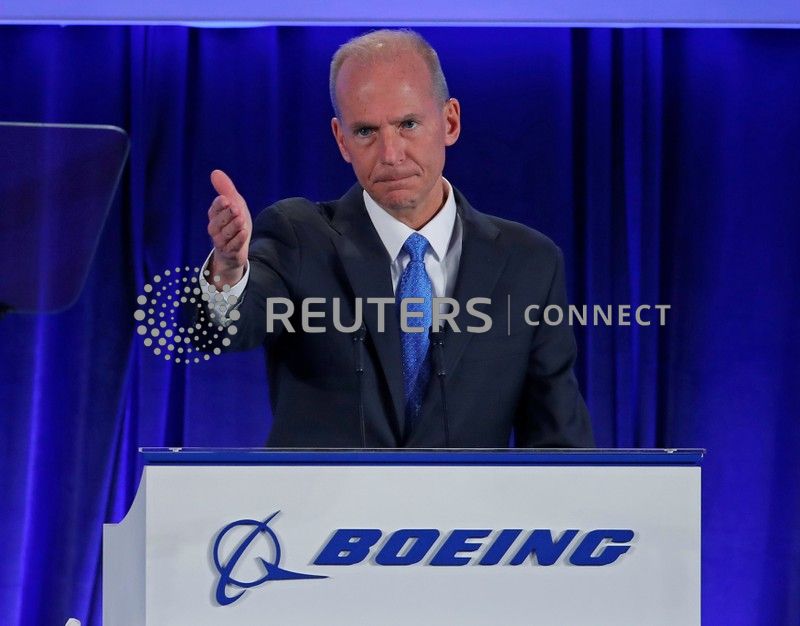 CHICAGO (Reuters) – Boeing Co CEO and Chairman Dennis Muilenburg emerged with his job intact at an annual meeting on Monday and promised to win back the public’s trust after facing tough questions in the wake of two fatal crashes of the 737 MAX plane.

Battling the biggest crisis of his nearly four years as chief executive officer, Muilenburg survived a shareholder motion to split his chairman and CEO roles.

He later told reporters he would continue to lead the company through a crisis that has triggered the grounding of Boeing’s fastest-selling plane, lawsuits, investigations and lingering concerns over the 737 MAX’s safety.

“I am very focused on safety going forward,” he said after the meeting when reporters asked if he had considered resigning. “I am strongly vested in that. My clear intent is to continue to lead on the front of safety, quality and integrity.”

However, Boeing will need to win back the trust of customers, passengers and regulators following the crashes.

“We know we do have work to do to earn and re-earn that trust and we will,” Muilenburg said before ending the 16-minute news conference and ignoring shouted questions from reporters as he walked away.

The family of one American victim, 24-year-old Samya Stumo, staged a silent protest outside the meeting site in Chicago, while the families of other victims among the 157 killed in the crash of an Ethiopian Airlines 737 MAX on March 10 held a tearful press conference at a Chicago law firm.

That plane plunged to the ground shortly after takeoff from Addis Ababa, five months after a similar Lion Air nosedive in Indonesia that killed all 189 passengers and crew.

The families spoke after filing a wrongful death lawsuit against Boeing and Rosemount Aerospace Inc, which designed the sensors used in the 737 MAX, in Chicago federal court, one of dozens of lawsuits Boeing is facing over both crashes.

Daniel Johnson, an engineer and an intermittent Boeing shareholder since 1984, said the company “really stubbed their toe” by allowing the plane’s anti-stall system – called Maneuvering Characteristics Augmentation System or MCAS – to rely on only one sensor.

“The question is: Will they need to rebrand? We don’t know how much the general public actually knows what a 737 MAX is,” Johnson said outside the meeting.

About 150 shareholders gathered in the auditorium of the Chicago Field Museum for the meeting, but only a handful questioned Muilenburg over the MAX.

One shareholder asked Muilenburg what Boeing was doing on safety assessments following the crashes. The CEO said the company’s commitment to safety has not wavered.

“Safety is at the core of what we do. Every day, we try to get better,” Muilenburg said at the meeting, which took place exactly six months after the Lion Air crash.

Shares of the company, worth $214 billion, have lost nearly 10 percent of their value since the March 10 crash.

Boeing is under pressure to deliver a software fix to prevent erroneous data from triggering the MCAS system and a new pilot training package that will convince global regulators, and the flying public, that the aircraft is safe.

Boeing has acknowledged that the accidental firing of the software based on bad sensor data was a common link in the chain of events leading to the two accidents.

“We know we can break this link in the chain. It’s our responsibility to eliminate this risk,” Muilenburg told shareholders. When asked by reporters if the MCAS system was flawed, he said only that Boeing was making improvements to it.

The U.S. Federal Aviation Administration could clear Boeing’s 737 MAX jet to fly in late May or the first part of June, two people familiar with the matter said on Friday, though Boeing has yet to submit the updated software and training for review.

Some pilots have warned that draft training proposals do not go far enough to address their concerns.

Boeing repeated on Monday it was making progress to certify its grounded jets with the software update.

Meanwhile, deliveries of the 737 MAX, which airlines around the world had been relying on to service a growing air travel industry for years to come, are on hold.

Muilenburg said Boeing has been talking to customers and is sensitive to the impact of the crisis on their operations. He said the focus is on getting the MAX flying again.

Last week Boeing abandoned its 2019 financial outlook, halted share buybacks and said lowered production due to the 737 MAX grounding had cost it at least $1 billion so far.

Shareholders have filed a lawsuit accusing the company of defrauding them by concealing safety deficiencies in the plane. The model is also the target of investigations by U.S. transportation authorities and the Department of Justice.

The FAA is also investigating at least four calls from whistleblowers on concerns including the angle of attack sensor and MCAS, a government official said on Monday.

Manant Vaidya of Canada, who lost six family members in the Ethiopian crash, said he had repeatedly heard Muilenburg defending the design and certification of the 737 MAX.

“At the end of the day, if everything was followed how could the crash have occurred?” Vaidya asked at the news conference at Clifford Law Offices.